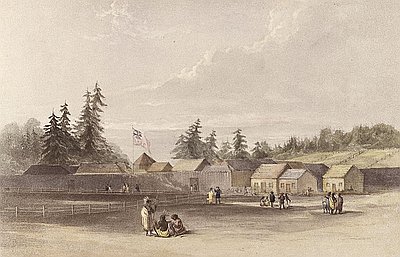 This hand-colored lithograph of Fort Vancouver was based on a sketch drawn by Henry James Warre in 1845 or 1846. The British government sent Warre, an army lieutenant, and another officer to the Pacific Northwest to ascertain the status of American settlement in the Pacific Northwest. They visited several forts and settlements around the region during their seven-month visit to the Oregon Country.

While the lithograph shows Natives at Fort Vancouver as wearing the headdresses and clothing of Plains Indians, Warre’s original rough sketch shows figures that might have been French Canadian or Metis (people of French Canadian and native ancestry). The lithograph is from Warre’s book, Sketches in North American and the Oregon Territory, published in London, England in 1848. The lithographer added additional Indians into the image, and may have altered their appearance to fit English assumptions about Native Americans.

Fort Vancouver was a political and economical stronghold in the Pacific Northwest for the London-based Hudson’s Bay Company.  From 1824-1846, Dr. John McLoughlin lived at the fort and was in charge of HBC’s Columbia District, which encompassed the entire Columbia River Basin.  Under McLoughlin’s leadership, Fort Vancouver grew into a bustling, self-sustaining post that included a diverse and vibrant community.  Employees and residents included French Canadians, Metis, Natives, Hawaiians, and British.

In addition to fur-storage facilities, the fort had a gristmill, dairy, orchards, farmlands, pasture for cattle and other livestock, and its own sawmill.  British employees and their wives lived inside the fort in socially stratified quarters. The lowest-ranking, non-British laborers lived in a multi-cultural village outside of the fort’s walls.  People called the village Kanaka, the Hawaiian word for “person,” because of the predominance of Hawaiians there.

John McLoughlin was born in 1784 in Quebec, Canada, to a poor Catholic father and upper class Protestant mother. Apprenticing a physician, he became a doctor himself in 1803. McLoughlin fled Quebec that year after a scuffle with a British Army officer. He headed to the Canadian West to join …