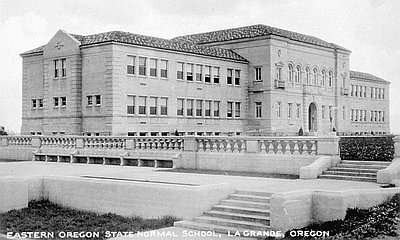 This photograph of the Eastern Oregon Normal School was taken by Wesley Andrews around 1929. Andrews was a professional photographer who had studios in Baker City and Portland.

The Methodist Episcopal Church established Oregon’s first institution of higher education east of the Cascades, the Blue Mountain University. The university, located in La Grande, officially opened its doors in 1875 but was forced to shut down just eleven years later due to financial difficulties.

It would be another twenty years before eastern Oregon would regain an institute of higher learning. In 1925, Governor Walter Pierce, a strong supporter of education and a resident of eastern Oregon prior to his election to the state’s highest office, sponsored a bill to create the Eastern Oregon Normal School. The legislature submitted the proposal to the voters of Oregon, who approved it that fall.

The board of regents chose to locate the new university in La Grande. Construction of the main building, designed by Portland architect John V. Bennes, was finished in 1929. The original campus plan called for the construction of several more buildings, but the onset of the Great Depression in the fall of 1929 forced the state to limit construction to the building shown in the photograph above, today known as Inlow Hall.

More than 200 men and women signed up for classes when the Eastern Oregon Normal School officially opened its doors in June 1929. The school only offered a two-year teaching certificate at first, but by the end of the 1930s it offered two-, three-, and four-year degree programs.

In 1956, the Eastern Oregon Normal School was renamed the Eastern Oregon College of Education. It was again renamed in 1973, when it became Eastern Oregon State College, and in 1997 it acquired its current name, Eastern Oregon University. There are currently over 3,000 students enrolled in twenty-six baccalaureate degree programs. In 2000, U.S. News & World Report ranked the institution among the top four public liberal arts colleges in the West.