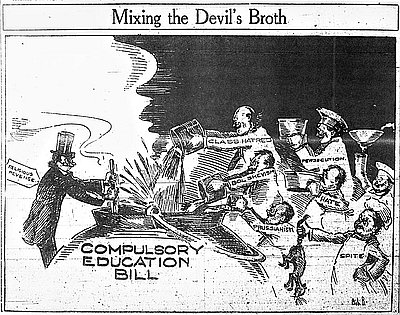 This political cartoon appeared on the front page of the Portland Telegram days before Oregon voters passed the initiative on compulsory public school attendance in the 1922 general election. The cartoonist used the imagery of the melting pot, a device proponents of the bill included in their campaign literature, to suggest that public schools would be a good mechanism for the assimilation of immigrants. The cartoon, however, offers a sinister view of what can happen when groups are robbed of their liberty and resentments brew.

The Compulsory Education Bill required parents and guardians to send their children to public schools. Many proponents of the bill, including members of the Ku Klux Klan, targeted private Catholic schools and encouraged voters to be suspicious of what they believed were the un-American ideas taught there. Advocates for the bill also decried the “elitism” of private schools, and a supporting statement in the voters pamphlet used the melting-pot metaphor to describe their position. “Mix the children of the foreign born with the native born and the rich with the poor,” the statement advised. “Mix those with prejudices in the public school melting pot for a few years while their minds are plastic, and finally bring out the finished product—a true American.”

Those who opposed the bill also spoke out. One argument in the voters pamphlet, for example, noted the similarity between the provisions of the bill and the Prussian system, which undermined freedom of thought and gave the state dictatorial powers, and the methods of Bolshevist Russia, which treated children like wards of the state. Portland attorney A. F. Flegel, speaking at a meeting at Jefferson High School, described the bill as having been “conceived in hate and intolerance.” Others argued that the bill fostered class hatred by wrongly accusing private schools of elitism. Opponents further maintained that the “melting pot” argument would not hold up in practice. With public schools organized by district, the bill would place together those who lived in the same neighborhoods, which were segregated largely by class and ethnicity.

Leading up to the election, editors filled their newspapers with articles on the controversial issue. Few newspapers, however, editorialized in favor of the opposition as consistently as the Portland Telegram.