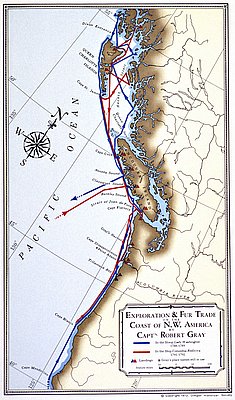 Captain Robert Gray made two fur trading trips to the Northwest Coast, the first in 1788-89 and the second in 1791-92. These expeditions originated in New England, organized by local entrepreneurs who wished to exploit the sea otter fur trade then developing in the region. Over the spring and summer of 1787 six investors purchased and outfitted two ships for the first maritime fur expedition to sail from Boston Harbor. The Columbia Rediviva, under the command of John Kendrick, and the Lady Washington, captained by Robert Gray, departed on October 1, 1787. Both ships reached Nootka Sound on Vancouver Island in late September 1788. Over the next year, Kendrick and Gray traded with the Natives in the region for sea otter furs, with Gray taking the lead role by traveling north to the Queen Charlotte Islands (Haida Gwaii) and exploring the west coast of Vancouver Island. Kendrick and Gray later changed ships. Kendrick chose to remain in the Pacific region with the Washington. Commanding the Columbia, Gray completed the first American circumnavigation of the world after stops in Hawaii and China.

The Columbia arrived in Boston in August 1790. Although the venture was not a financial success—due in part to the return of only one ship—some of the original investors organized a second expedition under the command of Robert Gray. Since Gray held shares in the new venture, he was motivated to ensure a return on the group’s investment. Departing Boston on October 1, 1790, the Columbia reached Vancouver Island in early June 1791. Over the next year, Gray’s expedition traded with regional Native groups and explored the coastline from the tip of southern Alaska to Tillamook Bay. In May 1792, he became the first Euro-American to navigate a ship across the Columbia bar and confirm the existence of the “River of the West,” which he named the Columbia. After trading otter skins for Asian goods in China, the Columbia returned to Boston in late July 1793. The venture was a commercial success and influenced other New England merchants to outfit vessels for the maritime fur trade. The “Boston Men” soon dominated the maritime fur trade on the Northwest Coast, outdistancing both Spanish and British rivals. American statesmen later used Gray’s entrance into the Columbia to support U.S. territorial claims in the Far West.