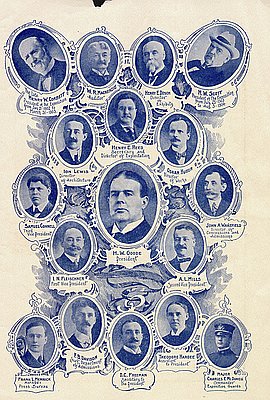 One of the earliest proponents of a Portland Exposition was Henry E. Dosch, a retired merchant and member of the state horticultural board. In 1899, Dosch wrote a newspaper article stating that a world’s fair would bring money to the city. Dosch had organized Oregon agricultural exhibits at fairs in Chicago (1893) and Omaha (1899).

By 1900, the idea had taken hold among Portland’s business elite. In addition, the Oregon Historical Society endorsed the fair and suggested the event be a centennial celebration of the exploration expedition led by Meriwether Lewis and William Clark. In 1901, banker Henry W. Corbett, Oregonian editor and Historical Society President Harvey W. Scott, and Joel M. Long, of the Board of Trade, incorporated under a lengthy title: The Lewis and Clark Centennial and American Pacific Exposition and Oriental Fair. Corbett served as the chairman of the corporation, which then sold stock to Portland business owners, streetcar companies, and land speculators. After Corbett died in 1903, Scott took over as the Exposition Company’s president for a one-year term before handing the presidency over to Portland General Electric executive Henry W. Goode.

While the state endorsed the fair and funded much of the building construction, the venture remained a private business. The federal government also chipped in when Congress allocated $475,000 for a government building and exhibits. In the end, the Exposition Company made a net profit of $84,461.

In this letter and its response, Bertha Burger of Denver, Colorado, seeks a job at the 1905 Lewis and Clark Centennial Exposition and Oriental Fair in Portland. Henry E. Dosch, a German-immigrant and Civil War veteran who became a successful Portland merchant, was the exposition’s director of exhibits. People throughout …

In the initial letter written to which this is a response, Bertha Burger of Denver, Colorado, seeks a job at the 1905 Lewis and Clark Centennial Exposition and Oriental Fair in Portland. Henry E. Dosch, a German-immigrant and Civil War veteran who became a successful Portland merchant, was the exposition’s …

The 1905 Lewis and Clark Exposition and Oriental Fair in Portland was illuminated at night by 100,000 lamps that outlined the graceful fair buildings, streets, and walkways. “No more enticing sight has ever been seen anywhere” asserted the Exposition’s secretary and historian, Henry E. Reed. The Exposition also featured a …