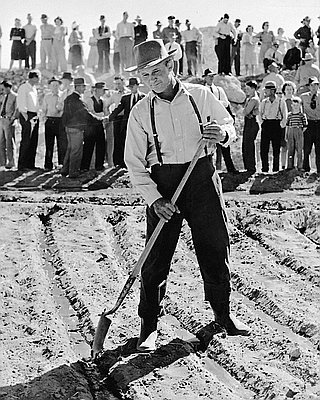 This photograph shows George Rodman spreading irrigation water over his farmland near Culver on May 18, 1946. Rodman was the first farmer to receive water from the Deschutes Irrigation Project.

Efforts to irrigate the arid lands of the Deschutes River Basin began in the early 1870s with the diversion of water from Squaw Creek. By 1905, six private irrigation districts had formed, eventually irrigating a combined 68,649 acres of land. Calls by the Portland Chamber of Commerce for federal assistance in the “reclamation” of more land in Central Oregon began in September of 1912, and by year’s end, the federal government had committed $50,000 for a survey of the Deschutes country. Two years later, the U.S. Geological Survey (USGS) completed the study, recommending construction of two earth-filled storage dams for the irrigation of 200,000 acres managed in four separate units.

Although the federal government was initially willing to lend its assistance, controversies over the diversion of water used by Bend’s lumber mills and local electric power companies stalled the allocation of funds needed to start the project. In 1921, with no resolution of the local conflicts in sight, the U.S. Reclamation Service—renamed the U.S. Bureau of Reclamation in 1923—diverted its allocation of $400,000 from the project to help pay for a reclamation project in Oregon’s Baker County.

Prospects for federal investment began to improve in August 1927, after a visit to the Deschutes country by a congressional committee studying potential reclamation projects. Their visit followed a prolonged drought that had bankrupted many of the region’s dryland farmers and depopulated much of the rural countryside. Upon the committee’s return to Washington, D.C., they endorsed the reclamation of the North Unit as defined by the USGS’s 1914 survey. The onset of the Great Depression slowed efforts to follow through with the committee’s recommendations, but in 1936, the Bureau of Reclamation endorsed the construction of the Wickiup Dam, approximately forty miles south of Bend, to store enough water to irrigate 50,000 acres in the North Unit.  A year later, President Franklin D. Roosevelt approved the allocation of $8 million and in August 1938, construction finally got underway.  By May 1946, at a total cost of $9.9 million, water began being delivered to farmers in the North Unit.