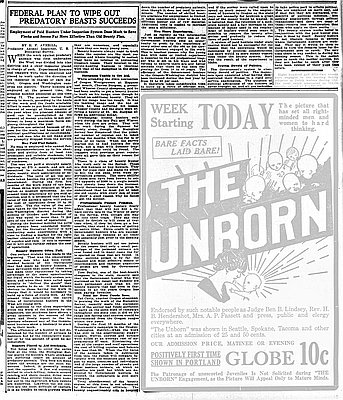 This article, written by A. F. Averill, appeared in the Oregonian on April 29, 1917.  Averill was chief inspector of the U.S. Biological Survey’s Oregon-Washington district, headquartered in Pendleton, Oregon.  Like other chief inspectors within the Biological Survey, Averill felt that the bounty-hunting system, then in place in most states, was an inefficient means to pursue the extermination of predator species.  Instead, he argued for the use of salaried hunters with federal oversight.

In Oregon, organized efforts to control predator populations began in 1843, when American settlers in the Willamette Valley formed the Oregon Wolf Association (OWA).  The OWA committee set bounties for the scalps of coyotes ($0.50), lynxes ($1.50), bears ($2.00), wolves ($3.00), and mountain lions ($5.00), but limited the full rewards to “whites and their descendents.”  Indians could also turn in predator scalps, but were given “one half as much as the whites.”

The federal government became involved with predator control in Oregon in 1905, when the U.S. Forest Service started employing trappers to kill wolves in national forests.   Ten years later, at the onset of World War I, the Bureau of Biological Survey—now the U.S. Fish and Wildlife Service—was given congressional authority to employ salaried hunters for the protection of the nation’s livestock—a resource deemed critical for the war effort.  The Biological Survey’s work was paid for by a federal head-tax upon livestock and was supplemented with matching funds by participating county and state governments.

Hunters employed by the Biological Survey primarily targeted wolves, coyotes, cougars, lynxes, bobcats, bears, badgers, skunks, and porcupines.  With the exception of some criticism by professional mammologists during the mid-1920s, the Biological Survey had few detractors until the 1960s, when they began to come under increasing public scrutiny for their heavy use of chemically-poisoned bait stations in their efforts to eradicate coyotes from the American West.  Since then, publicly-funded predator control programs have continued amidst much controversy.