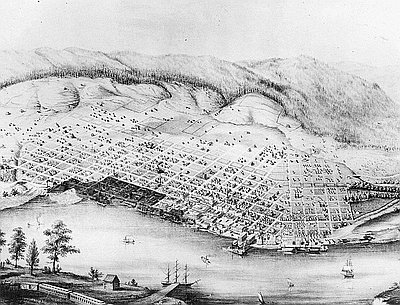 This map shows the twenty-two block area damaged in the Fire of 1873.  The fire damage is marked in dark on a map made three years earlier.  A large section of the town sustained damage, including mansions, tenements, and commercial property.  It could hardly have been otherwise since many buildings housed both a storefront business and an apartment above or behind it for the proprietor.  Many businesses were only partially insured — or not insured at all — and the net losses exceeded $925,000.

Only eight months before, in December of 1872, another fire that started in a Chinese laundry had destroyed several blocks around Morrison and Front Streets.  Although the official cause of the 1873 fire was never determined, many people believed it was started by anti-Chinese arsonists.  The site of the 1872 fire, which had yet to be rebuilt, acted as a buffer zone and aided in the containment of the second and much larger fire of 1873.

Although the fire’s damage was staggering, the citizens committed themselves to rebuilding, and the city recovered with remarkable quickness.  Partly as a result of rebuilding after the fire, the geographic center of the city later shifted to the west of what is shown on this map.