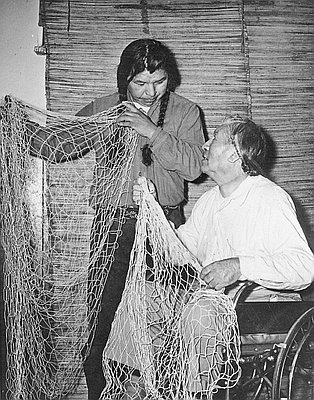 Netmaking has long been an important art among Columbia River Indians, who have relied on the river’s abundant salmon runs for millennia. Columbia River Indians traditionally made many different kinds of nets to catch salmon and other fish. The two nets shown above are dipnets, the most commonly used net at Celilo Falls prior to the construction of The Dalles Dam in the 1950s.

There are two kinds of dipnets. Movable dipnets are continually dipped into the water and swept downstream until a fish is caught. Set dipnets, on the other hand, are stationary. They are set up to catch fish falling back from a falls or strong current, as well as in eddies where fish rest.

Dipnets are effective only in turbulent waters where fish, concentrated by narrow channels and swift currents, are unable to see them. When The Dalles Dam was completed in 1957, the best dipnetting sites upstream of the dam were flooded, effectively destroying the traditional fishery at Celilo. Today, most Indian fishermen in the area are forced to use more expensive gillnets deployed from boats.

This undated photograph shows non-Indians fishing for salmon along the free-flowing and meandering Columbia River just upriver from Celilo Falls. Writing on the photograph indicates that the fishers are horse seining, a fishing strategy that caught large amounts of salmon by using horses to haul nets through the river toward …