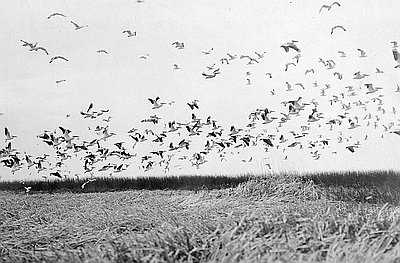 This photograph was taken by William Finley in 1908. It shows a flock of birds, mostly American white pelicans with some gulls, flying over Malheur Lake, today part of the Malheur National Wildlife Refuge.

William Finley was one of Oregon’s pioneer conservationists. In 1908 Finley and Herman T. Bohlman traveled to southeastern Oregon to photograph the wildlife of the Malheur-Harney Lakes Basin, which contains key habitat for birds migrating along the Pacific Flyway. Finley and Bohlman took dozens of photographs, paddling a canvas boat around the marshes in search of birds and other wildlife.

What they found appalled them. Plume hunters had nearly destroyed Malheur Lake’s population of great egrets, stripping them of their feathers to feed the nearly insatiable demand for plumes, which at the time were the height of women’s fashion. After stripping their feathers off, the plume hunters left the adults for dead while the young remained in the nests to starve to death. Environmental historian Nancy Langston writes that, “out of hundreds of thousands of egrets that had once nested in Malheur Lake, only 121 were left when Finley toured the region. His horror at the decimation motivated him to begin a campaign to save the great marshes of southeastern Oregon.”

Finley, who headed the Oregon Audubon Society, lobbied President Theodore Roosevelt to reserve Malheur Lake as a national bird refuge. An ardent conservationist, Roosevelt had established the first bird refuge in 1901, a pelican rookery in Florida. By 1909 he had established fifty-three national wildlife refuges across the country. Finley’s efforts were largely responsible for calling both Malheur Lake and Lower Klamath Lake to Roosevelt’s attention, both of which the president set aside as national bird refuges in 1908. Eight years later, President Woodrow Wilson signed the Migratory Bird Treaty, further strengthening the federal government's role in the protection of migratory birds.

Finley continued to lobby on behalf of bird conservation for decades after the establishment of Malheur Bird Refuge. In 1934, the federal government acquired an additional 65,000 acres along the Blitzen River, substantially increasing the size of the refuge and adding key riparian habitat. Thanks in large part to Finley’s efforts, millions of migratory birds continue to return to the Malheur National Wildlife Refuge, including the pelicans shown in the photograph above.