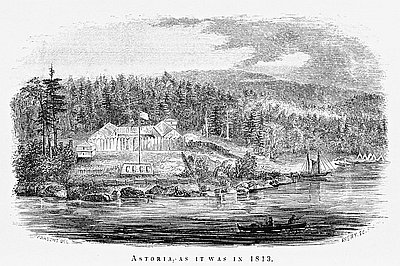 Fort Astoria was established by John Jacob Astor’s Pacific Fur Company in 1811. Located on the southern shore of the Columbia at the river’s mouth, the fort served as the company’s regional trade depot for the collection of inland furs, particularly highly prized beaver pelts. The fort was located amidst the lands of the Clatsop and Chinook people, within the influence of powerful Indian headmen such as Coalpo (Clatsop), Daitshowan (Clatsop), and Comcomly (Chinook).

In 1813 war between the United States and Britain led to the sale of Fort Astoria to the Canadian-based North West Company, who renamed the post Fort George. And, in 1821, after years of destructive competition and violent confrontations, the North West Company merged their operations with the larger Hudson’s Bay Company.

The London-based Hudson’s Bay Company used Fort George as the main depot for the region’s fur trade until the winter of 1824–1825, when the headquarters were relocated upriver to Fort Vancouver (modern day Vancouver, WA). The relocation was spurred by the poor agricultural opportunities around Fort George and political expediency. Hudson’s Bay Company administrators such as George Simpson believed that eventually the United States would make a claim to the land south of the Columbia River. Relocating upriver allowed the British fur traders to obtain a high degree of self-sufficiency while also staking their own claim to the land north of the Columbia River.

Fort George was temporarily abandoned from 1825 through 1829, but was reoccupied on a small scale by the Hudson’s Bay Company from 1830 through 1848 for its seasonal use in the company’s salmon trade. During that time, the fort became a key post for procuring, storing, and transporting salted and pickled salmon destined to be traded primarily at Oahu in the Sandwich Islands (present day Hawai‘i).