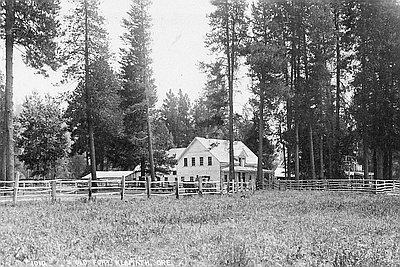 Colonel C. S. Drew, First Oregon Cavalry, was sent in 1862 to scout a location for an Army post to protect settlers in the new West.  The site, pictured here 42 miles north of present-day Klamath Falls, was chosen for its abundant water, timber, pastureland, and beauty.  Troop C, First Oregon Cavalry, led by Captain William Kelley, moved into the area in the fall of 1863 and began building the fort.  The troops then constructed a sawmill and, ultimately, close to 50 buildings and structures.

The Modoc War of 1872-1873 was the most significant event of the fort’s 27-year history.  Every surviving Modoc Indian who participated in the war was marched under guard to Fort Klamath.  Six Modoc leaders, including Kintpuash, or Captain Jack, were shackled and held in the guardhouse, while 140 other Modoc men, women, and children were confined to a small stockade.  During the leaders’ court-martial, Klamath Indian Agent Frank Riddle and his wife Toby, or Winema, served as interpreters for the defendants.  On October 3, 1873, the Modoc leaders were executed following their conviction for killing General Edward R. S. Canby and other members of a U.S. Army peace commission.  A multitude of curious spectators, including schoolchildren from Ashland, traveled to Fort Klamath to witness the hangings.  Souvenirs were passed out marking the event.  After watching their fellow tribesmen and family members die, the remaining Modocs were transported to the Oklahoma Territory and exile.  In 1909, the survivors were allowed to return to Oregon and the Klamath Reservation.

A congressional order closed Fort Klamath on August 9, 1889, and the land around the fort was given to the state to sell.  The gravesites of Captain Jack and three Modoc tribesmen executed in 1873 remain at the fort.