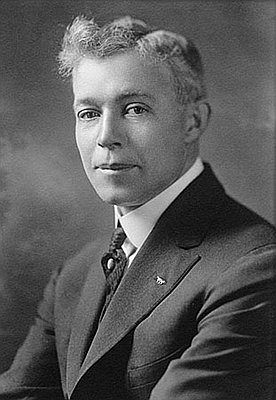 Fred L. Gifford was the leader (“Grand Dragon”) for the Oregon Ku Klux Klan between 1921 and 1924, when the “invisible empire” was influential in virtually every part of the state. From Portland, Gifford traveled Oregon to recruit new members and to promote the Klan’s local and national platforms. While nationally the Klan sought to preserve the economic and political privilege of native-born Anglo Protestants, the Oregon chapter focused on the perceived growing threat of Catholicism.

Born in North Branch, Minnesota in 1878, Gifford moved to Portland in 1888. Before his involvement with the Klan he worked as a business agent for a Portland labor union and as line superintendent for the Northwestern Electric Company, a job he held throughout his career as Grand Dragon. In Klan meetings Gifford was “loud, arrogant, dictatorial,” but in public he was “a model of quiet circumspection.”

As head of the Oregon Klan, Gifford recruited thousands of members, among them politicians, including Kaspar K. Kubli, a state legislator and speaker of the Oregon House of Representatives. These politicians passed some Klan endorsed legislation, such as a compulsory public school bill of 1922, which would have closed all Catholic schools; however, the U.S. Supreme Court deemed the law unconstitutional in 1924.

Gifford’s success as Grand Dragon was short-lived. In 1923, Oregon Klansmen nominated him as their candidate for the primary election for U.S. Senate. To the dismay of national Klan leaders in Atlanta, Georgia, he turned down the opportunity, claiming he did not desire to enter politics.

By 1924 the Klan was disorganized and, in the eyes of many Oregonians, corrupt. Gifford worked with the Portland office of the International Detective Agency and as a circuit court bailiff before his death in Portland on January 23, 1945. At that time, he was still associated with the Klan.

David A. Horowitz. “The Klansman as Outsider: Ethnocultural Solidarity and Antielitism in the Oregon Ku Klux Klan of the 1920s.” Pacific Northwest Quarterly 80:1 (1989), 12-20.