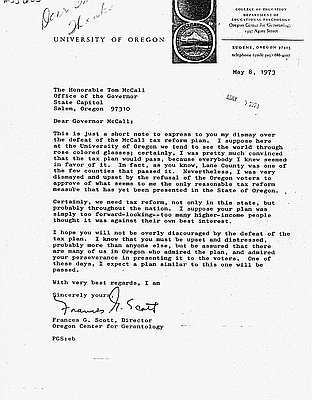 This letter from Frances G. Scott to Governor Tom McCall was one of hundreds that poured into the governor’s office upon the defeat of the McCall Plan, a bold tax reform measure intended to stabilize funding of public schools and to offer property tax relief. After learning from the media McCall’s personal anguish over losing a measure so important to him, many wrote the popular governor to express admiration for him and his plan. McCall also received a smattering of letters from respectful citizens wishing to explain their reasons for voting against the plan.

In 1973, public schools received only about a third of their funding from the state—the bulk of the budget came from local property taxes. Rising property taxes concerned many Oregonians. Without a sales tax, Oregon’s property and income taxes were among the highest in the nation. When school funding ran short of operating costs, as it did frequently in districts with weak property tax bases, local elections presented measures asking taxpayers to levy additional taxes for the short term.

The McCall Plan provided local property tax relief by increasing state support of schools to ninety percent. To pay for the schools, the plan raised state income tax by thirty percent overall. By shifting the tax burden to the wealthy, McCall insisted that he would lower taxes for four of every five Oregonians.

Large-scale tax reform was notoriously difficult to pass. Nevertheless, McCall remained confident in the power of his popularity. As McCall’s biographer Brent Walth described, the governor “welded his pride to his tax plan.” He tirelessly and optimistically canvassed the state, speaking at rallies and to citizens on the street. As results became apparent to McCall late on election night, his defeat left him feeling personally rejected.

Letters of support helped McCall overcome the defeat. Many, like this one, suggested that Oregon’s wealthiest corporations managed to confuse the voters with their interpretation of the complicated plan. Others suggested that the recent Watergate scandal left voters feeling skeptical of government. A few writers offered their reasons for voting against the plan. Some thought school districts needed to operate within their means, others complained they found the plan hard to decipher, and others believed that the tax relief would be temporary. Be they for or against the tax plan, most expressed personal admiration for the governor.