From Frederick Mellis to Governor Chamberlain 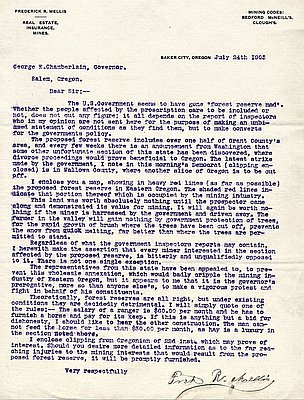 This letter was written by Baker City businessman Frederick Mellis to Oregon Governor George Chamberlain on July 24, 1903. It discusses the mining industry’s opposition to the establishment of forest reserves in northeastern Oregon.

In 1901, a group of Baker County residents submitted a petition to their congressional representative calling for the creation of a forest reserve in the Blue Mountains in order to protect the area’s water supply. The Secretary of the Interior temporarily withdrew more than 3 million acres from the public domain in the Blue Mountains in June of the following year. Additional land was withdrawn in Wallowa County in November 1902, August 1903, and May 1904. These temporary withdrawals were intended to prevent illegal land speculation and to give time for federal surveyors to determine the boundaries of permanent reserves.

As the letter reproduced here indicates, the withdrawal of such a large swath of land was extremely unpopular with some Oregonians. Mellis argues that the “U.S. Government seems to have gone ‘forest reserve mad,’” and that the Blue Mountain reserve would be detrimental to the mining industry, which required large amounts of wood for fuel and other uses. Federal surveyor Harold Langille suggested in a 1906 report that the large mine operators in the area were accustomed to helping “themselves from the available supply of public timber” and were therefore wary of any government regulation of logging.

The smaller mine operators, however, were more sympathetic to the reserves. Langille noted that “several of the prospectors offer the statement that the small miner or prospector who is developing his claim is, at the present time, largely at the mercy of the large operators.” The large mining concerns, they argued, monopolized the timber supply, making it difficult for small miners to operate. Langille concluded that “the great destruction of timber wrought by these large plants is causing alarm even to the companies who have consumed the material,” and that “the forests of the mining sections will soon be a thing of the past unless some action is taken to conserve the supply by regulating the cutting and requiring more careful use.”

In May 1905, President Theodore Roosevelt made the Wallowa Forest Reserve permanent. The following year, he established the Blue Mountain Forest Reserve. These two reserves later evolved into the Wallowa-Whitman, Malheur, Ochoco, and Umatilla national forests.