From George Drouillard to his Sister 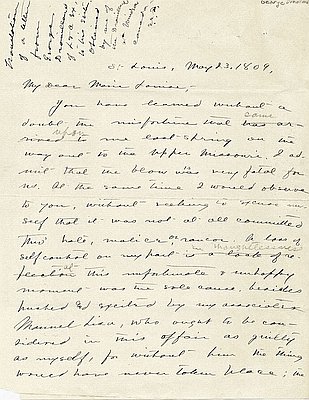 George Drouillard, a member of the Lewis and Clark Expedition, wrote this letter to his sister on May 23, 1809. It was probably transcribed in about 1900 by Eva Emery Dye, a chronicler and novelist who lived in Oregon City.

Drouillard was born sometime around 1776 or 1777 near present-day Sandwich, Ontario, the son of a Shawnee mother and a French Canadian father. He joined the Lewis and Clark Expedition in late 1803 when he was in his twenties. Unlike most of the men on the Expedition, Drouillard was not in the military but was instead hired as a civilian interpreter.

Drouillard’s skills as an outdoorsman and a diplomat proved to be as valuable as his proficiency with French and Indian sign language. During the Expedition, Drouillard hunted game, tracked down lost horses and a deserter, and bartered for canoes at Fort Clatsop. Meriwether Lewis, who considered Drouillard his right-hand man, remarked that the half-Shawnee woodsman was a “man of much merit” who had “acquitted himself with honor” while a member of the Corps of Discovery.

After the Expedition, Drouillard worked in the Missouri River fur trade, joining Manuel Lisa, a St. Louis-based trader. During an expedition in May 1807, Lisa ordered Drouillard to track down a deserter and to bring him back “dead or alive.” Drouillard ended up shooting the man, who died the next day. He was put on trial for murder in St. Louis, but the jury only spent fifteen minutes deliberating before finding him “not guilty.” Nevertheless, Drouillard was financially and emotionally devastated by the incident.

Drouillard returned to the fur trade, joining an expedition into the territory of the Blackfeet, who were not pleased to see trappers working their land. In early May 1810, Drouillard was out setting traps with two Delaware Indians when his group was attacked by a large party of mounted Blackfeet. According to a contemporary account, Drouillard put up a “most obstinate resistance,” but he and the two Delawares were overwhelmed.

Morris, Larry E. The Fate of the Corps: What Became of the Lewis and Clark Explorers after the Expedition. New Haven: Yale University Press, 2014.