From Granville Arnold to his Father 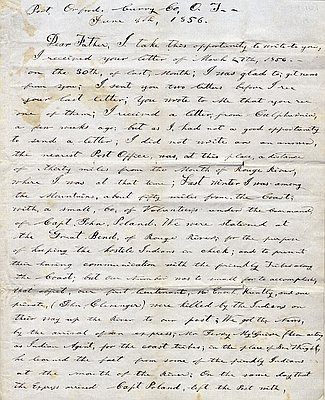 The 1850s were easily the bloodiest decade in the history of southwestern Oregon. While relations between whites and Indians in the Rogue Valley had long been marked by conflict, ethnic violence in the valley came to a head in the summer of 1853. It is difficult to say whether any specific incident started the war. One settler later summed up the situation by remarking that the “Rogue River War was caused by bad whites and vindictive Indians.”

The violence of 1853 brought out the worst in the settlers and miners, many of whom advocated the complete extermination of the Indians of the Rogue Valley. Some went on indiscriminate killing sprees, murdering any unfortunate Indians they encountered. Volunteers and regular troops, led by Joseph Lane, joined local whites in their war against the Indians in the fall of 1853. After several bloody engagements, Lane successfully negotiated a peace treaty with some of the Indian bands involved in the fighting.

The Table Rock Treaty of 1853 temporarily stemmed the violence, but the conflict between whites and Indians would simmer under the surface, ready to flare up again at the slightest provocation. This came in the fall of 1855, when war again broke out in the valley. Once more, volunteers from the Willamette Valley and regular army troops headed south to put down the Indians, many of whom had fled to the hills to make a final stand against the invading whites. The letter reproduced here—written by volunteer Granville S. Arnold to his father in June 1856—details several of the battles that ensued.

While the Indians often got the better of the inept volunteers, they were few in number and woefully undersupplied. Band after band surrendered to the soldiers, and in the summer of 1856, the Indians’ resistance effort finally collapsed. Stripped of their land and of their dignity, they were a broken and battered people. By the end of the year, more than two thousand Rogue River Indians had been forcibly relocated to the Coast Reservation, which later became the Siletz Reservation. The few Rogue River Indians who remained in their homeland were, historian Stephen Beckham writes, “hunted down, murdered, and, occasionally, captured.” Thus ended what is perhaps the darkest moment in Oregon history.