From Jesse Applegate to John Minto 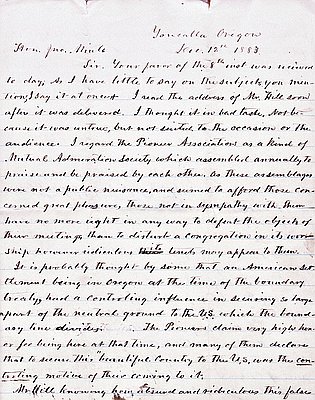 This letter of December 12, 1883, was written by Oregon pioneer Jesse Applegate to pioneer and Oregon State legislator John Minto.  Applegate was responding to a letter Minto had written him that questioned pioneer motivations for traveling overland along the Oregon or Applegate trails to settle in the Oregon Country.  Many settlers, as Applegate described, wanted to believe that their being in the Oregon Country had helped to solidify the U.S. claim to the territory.  Applegate cynically concluded, however, that he did not think that these pioneers made the “long and arduous journey across the plains to secure their ideal Oregon only to their country, but to possess it themselves.”

Jesse Applegate and his family migrated to Oregon from Missouri in 1843.  He built a farm and a mill, and worked as a surveyor in the Willamette Valley.  In 1846, Jesse, his brother Lindsay, and Levi Scott identified a trail to serve as an alternative and less arduous route into the Oregon Territory.  This new route bypassed the difficult Northern Cascade Mountains by traveling down the Willamette Valley into Southern Oregon, and turning east through the Klamath Basin.  Where Klamath Falls now stands, the trail turned southeast into California and on to Nevada where it connected to the California Trail.

John Minto, an English immigrant, landed in the U.S. in 1840 and traveled overland to Oregon four years later.  By 1847, he had established a claim near Salem and built a farm.  Minto was active in Oregon politics from the early 1860s until the 1890s, and was elected to the state legislature four times.  At the turn of the century, Minto turned to writing and offered detailed descriptions of conditions, events, and personalities of early Oregon settlement.  He was a frequent contributor to the Oregon Historical Quarterly.

Further Reading:
Minto, John. “From Youth to Age as an American: John Minto in the Willamette Valley,” Oregon Historical Quarterly 101, 2000: 237.

Applegate, Jesse A. A Day with the Cow Column: Recollections of My Boyhood. Fairfield, Wash, 1990.