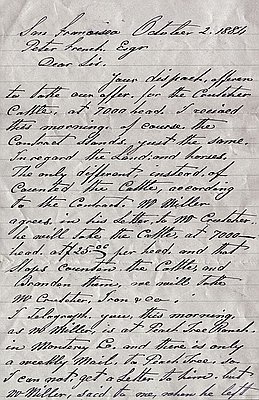 In this 1884 letter, cattle baron Peter French requested 7,000 head of cattle for the nearly 200,000-acre ranch he operated in Harney County. California cattle ranchers first moved into the Harney Basin in southeastern Oregon in the late 1860s. French, who moved into the area in 1872, was financed by his future father-in-law, California cattleman Hugh J. Glenn. Together, they owned the French-Glenn Live Stock Company near Malheur Lake and the Steens Mountains, one of several large corporate cattle operations in the area. Harney County ranchers transported their cattle to out-of-state markets in Nevada, California, and Chicago.

Cattle ranchers in Harney County came into conflict with the area’s original residents, the Wadatika band of the northern Paiutes. The ranchers’ cattle overran the land, depleting the native grasses and damaging the natural resources used by the Indians, who had lived in the region for thousands of years, hunting large game and gathering plants. Because some Paiutes raided immigrant homes and settlements and skirmished with the U.S. Army, the Wadatika band was forced into a five-year confinement on the Yakama Reservation in central Washington.

Ranchers such as Peter French also fought small homesteaders over land and water. In 1897, homesteader Edward L. Oliver shot and killed French after the two had been involved in a land dispute. Oliver argued that his actions were in self defense, and he was acquitted of manslaughter.