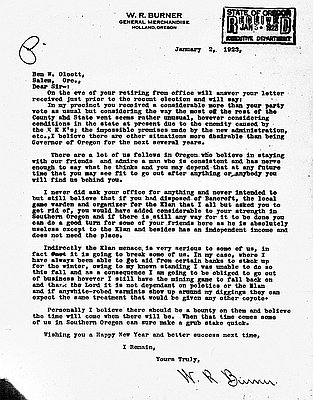 This letter, written in 1923 by W. R. Burner of Holland, in Josephine County, to outgoing Oregon Governor Benjamin Olcott, hints at the social and political divisiveness caused by the Invisible Empire of the Knights of the Ku Klux Klan in Oregon during the 1920s.

The Klan of the 1920s and 1930s was only indirectly related to the Klan of the 1860s, an organization formed in 1865 in opposition to Reconstruction after the Civil War. Although also devoted to white supremacy, the Second Klan, started in Georgia in 1915, was less violent than the original and had a broader political agenda. Its focus was on “100 percent Americanism” and perceived economic inequities and decline in moral values.

In 1921, KKK organizer Luther Ivan Powell, who was born in Shreveport, Louisiana, chose Medford as the first town in Oregon in which to work. The group was a Protestant organization and its members focused most of their attention on Roman Catholics, who made up about 8 percent of the state’s population. In 1922, the Klan successfully backed a statewide ballot measure making it mandatory for children to attend public school, an attempt by the organization to shut down private Catholic schools. Federal courts later ruled the measure unconstitutional.

The Klan also backed several candidates for local and statewide offices in the election of 1922, campaigns that were vigorously opposed by anti-Klan Oregonians. In the gubernatorial race, incumbent Benjamin Olcott, a Republican who opposed the Klan, lost by a wide margin to Democrat Walter Pierce, who campaigned with Klan support. Of the fifty-five voting precincts in Jackson County, only eight supported the anti-Klan candidate.

Though the majority of Jackson County voters supported Klan-backed candidates in 1922, many southern Oregon residents, such as W. R. Burner, strongly opposed the organization. By the end of the 1920s, the KKK had declined in Oregon, partly due to this opposition and partly because of internal strife caused by leadership struggles, organizational fragmentation, and a number of state and national scandals involving prominent Klansmen.

_____. Inside the Klavern: The Secret History of a Ku Klux Klan of the 1920s. Carbondale: Southern Illinois University Press, 1999.