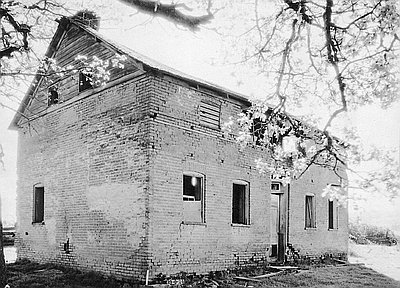 The photograph above, taken for the Historic American Buildings Survey in 1934, depicts the brick house built for George K. Gay near Hopewell in Yamhill County.

The George Gay house was once an Oregon landmark that was notable not only for being the first brick house in the Oregon Country, but also because Gay was a wealthy and politically prominent figure. Gay (1797-1882) was born in England, and first came to Oregon in 1812 with the overland party of the American Fur Company. Gay became a sailor when he was a young boy. His travels twice brought him to the area by land from California in the 1830s, and eventually he took up farming in the Willamette Valley near Hopewell. Gay participated in the meetings that formed Oregon’s provisional government in the 1840s, but left the area again during the California gold rush. He was married three times and had eight children. Although he was a prosperous farmer for some years and his brick house was a popular gathering place for travelers and his many friends, he died in poverty in 1882.

The bricks for Gay’s house were formed and kilned, or burned, on his farm by brick maker John M. Caddon about 1842. The plain, vernacular style house had two rooms on the first floor, each with an interior fireplace, and a single room above. Clay that is suitable for making brick can be found throughout western Oregon and in many other parts of the state. By the 1850s, brick buildings appeared in Oregon City and Salem, Portland and Jacksonville, Astoria and The Dalles. Nearly all of these early buildings were for stores, warehouses, public buildings, or, as at St. Paul, a church. Brick residences have remained uncommon in Oregon.

Bricks were used structurally in buildings such as George Gay’s house, where the walls supported the wooden beams that held the second floor and the roof. With the development of other structural systems for taller buildings early in the twentieth century, such as cast concrete and steel framing, brick became a favored facing material. In the twentieth century, a brickyard not far from George Gay’s house developed a reputation for quality face brick that was used in many important building projects on the West Coast. The Pacific Face Brick Company moved to Willamina in 1907, where it was renamed Willamina Clay Products. Its specialty decorative bricks were favored by some architects of the Northwest Regional style from the 1930s through the 1950s. Pietro Belluschi, for example, used Willamina bricks in the Portland Art Museum (1932; 1938). Willamina was Oregon’s last major brick maker; it closed in 1974.