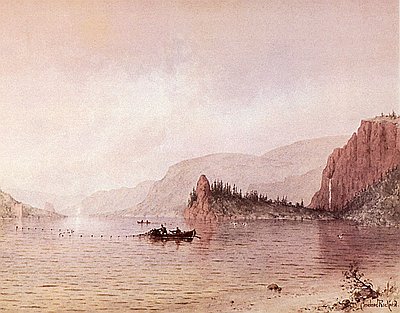 This ca. 1891 watercolor painting by Cleveland Rockwell shows fishers using gillnets on the Columbia River. Gill Netters Near Rooster Rock is one of hundreds of paintings Rockwell created, many of which featured maritime themes.

For more than thirty years, Rockwell worked for the U.S. Coast and Geodetic Survey. He charted a variety of West Coast waterways, including the Columbia and Willamette Rivers. While working as a surveyor, Rockwell painted many of the landscapes he was mapping. In 1891, he spent time surveying a part of the Columbia River not far from Rooster Rock, which is located in the Columbia River Gorge.

Rockwell adopted the style of the English Romantic painters, and was known for creating paintings that accurately reflected real landscapes. Rockwell lived and worked in Portland from 1879 until his death in 1907. During that time, the art community in the city was blossoming. In 1885, Rockwell helped found the Portland Art Club and he later served as the president of the Oregon Art Association.