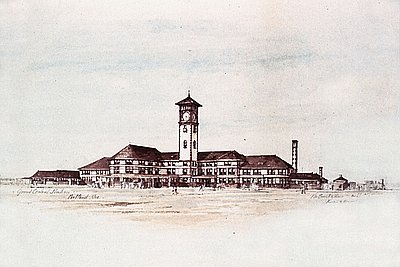 The architectural firm of Van Brunt & Howe of Kansas City and Boston prepared this presentation drawing of Grand Central Station in Portland about 1892. It depicts the third and final version of a design for Portland’s passenger railroad station. The building, known today as Union Station, was opened for service on February 14, 1896.

Three transcontinental railroads reached Portland between 1883 and 1887. Railroad entrepreneur Henry Villard, who controlled the Northern Pacific at the time of its construction into Portland in 1883, laid the initial plans for a major passenger station as well as the Portland Hotel. The initial planning for both buildings was placed in the hands of the well-known New York City architectural partnership of McKim, Mead & White. The financial problems of Villard and the Northern Pacific stalled the development late in 1883. When planning resumed in 1890, the site was moved several blocks to a marshy remnant of Couch Lake and a different architectural firm was hired.

Architect Henry Van Brunt had built a reputation designing college buildings, public libraries and churches in the Richardsonian Romanesque style in the Boston area. Van Brunt formed a partnership with Frank M. Howe in the early 1880s, and in 1885 Howe opened an office in Kansas City especially to do work designing stations for the Union Pacific Railroad. The firm also designed the landmark Union Pacific station in Cheyenne, Wyoming. “Union station” was a term used for railroad passenger stations that were used by two or more railroad companies; Portland’s Union Station, owned and operated by the Northern Pacific Terminal Co., served five companies in the 1920s, with more than 120 trains arriving and departing daily.

Union Station has undergone one major rebuilding since its opening. In 1930, an extensive interior renovation removed cast iron supporting columns from the main waiting room and reconfigured the ticket and waiting areas. The design was done by Pietro Belluschi, then emerging as an architectural designer in the Northwest Regional style and as a modernist. Using materials and a design vocabulary similar to that in his work for the Portland Art Museum (1931-1932), Belluschi installed sleek panels of travertine marble on the walls and floor. The numerous minor exterior alterations at this time conformed to the original materials and style, but Union Station’s interior leapt from Victorian Renaissance Revival to Art Deco. Today’s passengers are often unaware of the visual disjointing of this work, which today appears to be unobtrusive.