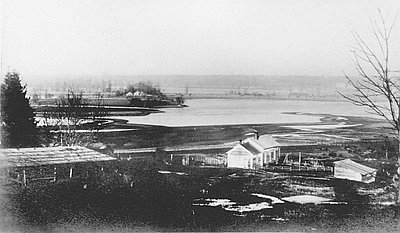 Before the 1905 Lewis and Clark Exposition, Guild’s Lake was a marshy area encompassing 400 acres in Northwest Portland. The shallow lake, which was fed by Balch Creek and groundwater, drained northwest into Kittredge and Doane lakes before connecting with the Willamette River. Trees near the lake included white ash, cedars, willows, and firs. This c.1904 photograph was taken near Balch Canyon, today in Macleay Park, looking northward toward Guild’s Lake and the Willamette River.

Guild’s Lake was named for Peter and Elizabeth Guild—pronounced Guile— who in 1847 claimed nearly 600 acres including the lake. In the 1880s, the area’s residents included Chinese immigrants who farmed small plots on the lake’s edge.  In 1888, the lake’s outlet to the Willamette River was cut off by an embankment built by the Northern Pacific Railroad for a rail connection between Portland and Seattle. By the 1890s, much of the land in and around the lake was owned by real estate speculators, and several sawmills and a garbage incinerator were operating there.

In 1902, the Lewis and Clark Exposition Company chose Guild’s Lake as the site of the world’s fair, and by 1903 workers had begun leveling ground for construction. The company hired John Olmstead, the son of famous landscape Frederick Law Olmsted, to design a plan for the fairgrounds.