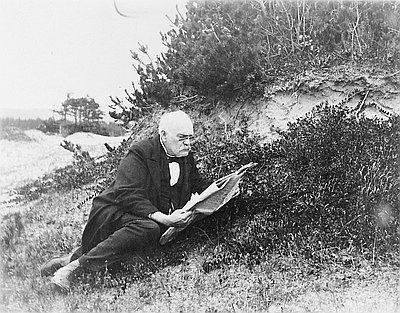 Scott was born on a farm near Groveland, Illinois. His sister was Oregon’s famous suffragette Abigail Scott Duniway. In 1852, as a teenager, Scott traveled the Oregon Trail and settled in the Willamette Valley. He worked several jobs to fund his education, first at the Tualatin Academy and later at Pacific University, where he was the only graduate of 1863 and the first graduate of the university.

In 1866, after being employed as the first librarian of the Portland library, Scott was hired as the editor of the Oregonian. He would remain the editor, and eventually become part owner, of the Oregonian until his death in 1910. He held perhaps the most influential position in Oregon’s media for forty years and shaped the Oregonian’s conservative perspective on such issues as women’s suffrage, the labor movement, and publicly funded schools.

In addition to his role as editor of the Oregonian, Scott was the first president of the Oregon Historical Society from 1898-1901. Acting as president of the society, in 1900, Scott endorsed the idea of the Lewis and Clark Exposition to bring national attention to the Pacific port of Portland and encourage further commercial investment in the region. From 1903 to 1904, Scott served as the president of the Exposition. He traveled to Washington D.C. to secure nearly half a million dollars in federal funding for the world’s fair.