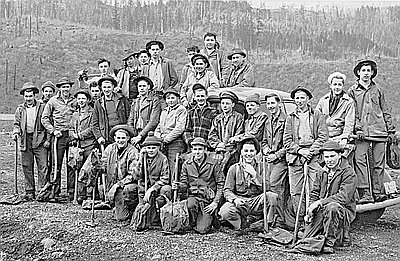 This photograph shows a group of high school boys from Hillsboro, Forest Grove, and Timber preparing to replant a section of the Tillamook Burn. It was taken by an Oregon Journal photographer in March 1945.

From 1933 to 1951 four massive forest fires swept over the northern part of Oregon’s Coast Range. These fires burned approximately 355,000 acres—an area known as the Tillamook Burn—and killed trees containing an estimated 13 billion board-feet. Most of the area was privately owned, but the scale of the fires made it impossible for landowners to finance the replanting of the area. The replanting of the Tillamook Burn, therefore, fell upon the state.

It was an enormous task, never before attempted at this scale. A four-year roadside beautification program was inaugurated in 1944, in which the boys pictured above took part, but serious replanting efforts did not begin until after the third Tillamook fire, which occurred in the fall of 1945. After several years of studying and politicking, in 1948 the state legislature submitted a $10.5 million bond measure to the voters to finance the replanting project. It was a close decision, passing by fewer than 2,000 votes.

Shortly after the passage of the bond measure, Portland Public Schools began working with the state Board of Forestry and various civic organizations and businesses to arrange for school children to help with the replanting effort. School administrators and teachers considered the Tillamook Burn Replanting Project an excellent way both to teach children about conservation and to build citizenship skills. Paul Rehmus, superintendent of Portland schools, wrote in December 1952 that “in replanting the Tillamook Burn, the youth of Portland are rebuilding for future generations. As they do this, they not only help to keep Oregon green, but they build strength and character for themselves.”

From 1950 to 1970, more than 20,000 school children planted trees in the Tillamook Burn. Although their efforts accounted for only about 1 percent of the more than 72 million seedlings that were planted during those years, the program was deemed a success in that it gave generations of school children a tangible stake in the future forest. Journalist Ellis Lucia rates the regeneration of the Tillamook Burn as “one of the great ecological success stories of the century, especially in the way it was accomplished. The Tillamook Burn is green again because thousands of people believed in something worthwhile, even though they might never live to see and enjoy the results.”