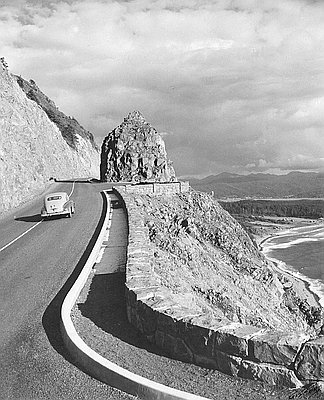 Following the route of an ancient Indian trail that linked the Clatsop and Tillamook people, Highway 101 was opened over the treacherous headland of Neahkahnie Mountain in 1940. It was the final segment of a highway that hugged the Oregon coast from Astoria south to the California border. A series of bridges built during the 1930s eliminated river ferry crossings on the route, while the ocean-view section over Neahkahnie Mountain replaced a much longer inland roadway.

Carved from the rock, the narrow roadway attempted to accommodate itself to the scenic splendor and natural features of the mountain. Envisioned as a scenic byway more than an artery of commerce, the Oregon Coast Highway often incorporated, as shown here, turnouts where motorists could stop and take in the expansive shoreline view. The highway engineers worked with the terrain, isolating and preserving a rocky outcropping and siting turnouts to coincide with the topography.

The concrete curbing and the stone wall were safety features, but the wall was also an appropriate artistic feature, and it preserved the view for highway drivers. The construction work was done primarily by workers in the Works Progress Administration (WPA), a Depression-era federal employment program. The WPA construction projects in Oregon were often characterized by the use of such rustic rockwork, which can also be seen at such locations as Rocky Butte in the Portland area and Pilot Butte in Bend.

With the completion of this final section of the Oregon Coast Highway, new areas were opened for recreation and development. The sandy Nehalem River spit, at the center right in the photograph, was the location of rustic summer cabins and the Manzanita Inn since the 1910s, when the railroad from Portland came down the river to Tillamook. The new Highway 101 spurred additional development here, including a state park at the end of the peninsula. Further north is Short Sand Beach, where Oswald West State Park memorializes the Oregon governor who is credited with establishing most of Oregon’s scenic coastline as public property, and who owned a rustic cabin a few miles north in Cannon Beach.