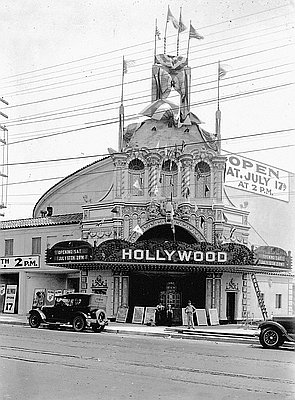 Banners and flags announce the opening of the Hollywood Theatre in Portland in this photograph taken in 1926.

The 1920s witnessed the explosive growth of the motion picture industry, and the popularity drove the construction of more and larger theaters to accommodate the crowds. Built at the end of the silent-film era—sound was not successfully introduced until 1927—the Hollywood seated 1,500 viewers in a “palace of luxury, comfort and entertainment unsurpassed by any theatre on the Coast,” according to an opening-day advertisement. While early theaters had been adapted from retail storefronts by unfurling a screen and setting up rows of chairs, the movie “palaces” that emerged in the 1920s were designed for the purpose, and they frequently used architecture to grab attention.

The Hollywood was designed by the architectural firm of Bennes & Herzog of Portland. The style has been described as “Byzantine,” but is better characterized as Spanish Colonial Revival. It was constructed of poured concrete, but the entrance was topped by an elaborate tower of polychrome (colored) terra cotta with arched niches flanked by turned pillars. The two-story street side of the theater was capped by roof tiles that carried out the Spanish Colonial theme. Most theaters of this size were located in downtown areas, but the Hollywood was sited in a neighborhood shopping district that was well served by both streetcar and automobile. Another exotically-themed theater in eastside Portland was the Oriental (1927), which had a restrained exterior in the Italian Renaissance style and an Asian-inspired interior, influenced by the Cambodian temples at Angkor Wat.

Only a few Oregon cities had a population sufficiently large to justify the construction of a movie “palace,” and most were smaller than the Hollywood. Among other examples were the architect-designed Bagdad Theatre (1927) in Portland, the Liberty Theatre (1925) in Astoria in the Italian Renaissance style, the Gothic Revival-style Elsinore (1925) in Salem, and the Egyptian (1925) in Marshfield (now Coos Bay). The worldwide fascination with the discovery of the tomb of the Egyptian Tomb of Tutankhamen (King Tut) in 1922 helped to popularize these exotic revival architectural styles, and also influenced fashion design and the Art Deco movement.