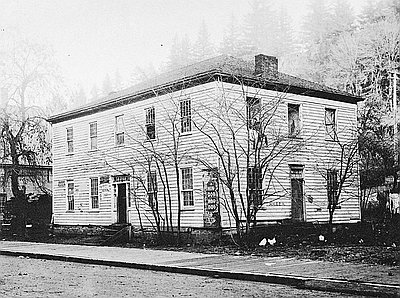 The historic residence of Dr. John McLoughlin, chief factor (manager) at the Hudson’s Bay Company operations at Fort Vancouver from 1825 until 1846, was photographed about 1908, when it was an abandoned and derelict building. The Canadian-born McLoughlin had claimed land at Oregon City as early as 1829, and he laid out the first plat for the town in 1842. When he retired in 1846, he moved to Oregon City, which was then in American-claimed territory. Near the falls at the south end of the town he built this two-story wooden Colonial-style house, no doubt using lumber from the mill he had built at Willamette Falls in 1843. Despite losing a battle with Protestant newcomers over property claims, the Catholic McLoughlin became an American citizen in 1851, and died in Oregon City in 1857. By the time of this photograph, McLoughlin was recognized as a towering figure in the early Euro American history of the Pacific Northwest.

The house of John and Marguerite McLoughlin is typical of residences that were built along the East Coast in the late eighteenth and early nineteenth centuries, of post-and-beam or box construction. It is utterly rectangular and symmetrical in design, with interior chimneys bracketing each end and a central hall and narrow horizontal lapped siding. The windows are identical, each featuring small panes, 16 panes in the top portion and 12 in the bottom; in architectural terminology, 16-over-12 double-hung sash windows. The detailing is confined to the window surrounds and a single frieze board beneath the eaves, and small-paned windows at the doors; the front door has panes directly over the door (transom) and on each side (side lights), while the back door has only a transom.

After the death of the McLoughlins—Marguerite died in 1860—the house was sold by the heirs in 1867. Located in an industrial area of Oregon City, it was remodeled with a rear addition to become the “infamous” Phoenix Hotel, “considered by many citizens of the area to be a place of ill repute.” In 1908, the owners, Hawley Pulp & Paper Company, wished to make other use of the property, and in 1909 the McLoughlin house became one of the state’s first historic preservation efforts.

After a protracted wrangle over the value of saving the old structure, the paper company donated the building to a local historical group, and it was moved to the top of the bluff overlooking Oregon City, where it stands today. The house was saved, but it languished until the Depression; then, under the Civilian Works Administration (CWA), it was renovated as directed by architect A. Glenn Stanton in 1935-1936. With the help of the Daughters of the American Revolution and the Colonial Dames of America, the McLoughlin Memorial Association was able to open the house as a museum. It was named a National Historic Site (the nation’s eleventh) in 1941, and was finally so dedicated in 1950. In 2003, the McLoughlin House became a unit of Fort Vancouver National Historic Site.