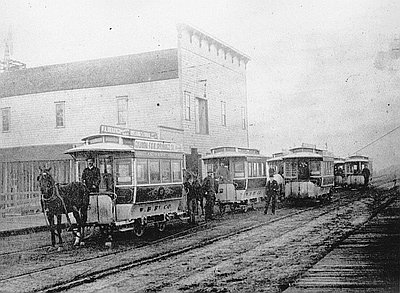 The problem of efficient transportation for Portland’s growing population began as early as 1870.  Many people did not own horses, so they traveled the city’s wooden sidewalks on foot or slogged through the muddy streets.  As Portland grew, getting to and from businesses each day consumed more and more of people’s time. To respond to the problem, the Portland Street Railway Company opened the first horse-drawn streetcar line in the area.  In 1872, the rail line began running through Portland’s central business district along Southwest First Street.  Although they were not particularly fast, the streetcars were well patronized, and other franchises, including the Willamette Bridge Railway Company, opened similar lines across the river in East Portland.

The horse-drawn streetcars in this photo belong to the Willamette Bridge Railway Company and are shown lined up in front of company barns in East Portland.  The company established its transportation service in March 1888, and in the following year, reached an exclusive agreement with the Oregon Railway & Navigation Company to run cars across the new Steele Bridge. The following year, the Willamette Bridge Railway Company decided to switch to electric cars on the new bridge.  They accelerated the planned changeover when all of the cars were destroyed and eighteen horses died in a barn fire in June 1890.

While electric cars could not operate during floods as horse-drawn carts could, electrification began, nonetheless, in 1890.  Horse-drawn streetcars were gradually replaced and by the mid-1890s, Portland’s main business district had migrated a few blocks toward the west and the First Street horse-drawn line ran only sporadically.