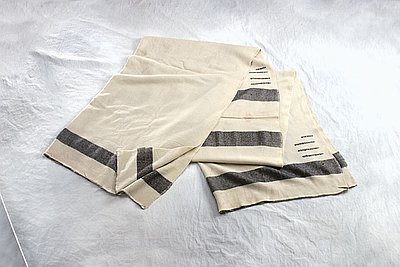 Formed in 1670 by the granting of a royal charter, the London-based Hudson’s Bay Company established its original fur-trading empire in the watershed of Hudson’s Bay in northeastern North America.  By the 1820s, the HBC had expanded its territory across the continent to the Pacific Ocean.  All the while, the company profited from its trading relationships with Native American groups.  The company’s North American administrators—mostly college-educated Scotsmen—kept the London office apprised of the trade goods in demand by their Indian trading partners.  In turn, the London office attempted to keep their trading posts across North America stocked with goods that would be valued enough within Indian communities to entice them to hunt and trap furs valued in European markets.

Blankets were one of the HBC’s most highly sought after goods.  Faced with the challenge of convincing Indians along the lower Columbia River that it was more desirable to trap beaver than to fish for salmon, the Chief Factor of Fort Vancouver, Dr. John McLoughlin, briefly prohibited his employees from trading the blankets for fish.  Indians who wanted the blankets were subsequently required to obtain their blankets by providing furs. Only after McLoughlin had developed a market for salted salmon in the Sandwich Islands—now referred to as the Hawaiian Islands—did he again allow blankets to be traded for the locally-abundant fish.

For a time, the HBC tried to fix prices by sewing stripes, called points, onto the edges of their blankets.  Blankets were marked for sale with up to four points, each point representing a “made beaver,” which was the accepted standard prime quality, adult size beaver pelt.  However, Native Americans across North America were quick to balk at the dictated prices since the pricing strategy didn’t allow for any haggling.  To Native American traders, prices were always negotiable.  Eventually the points were used instead as a mark of size, a practice which has continued to this day.

John McLoughlin, chief factor of the Hudson’s Bay Company’s Columbia Department, wrote this letter to his superiors on August 10, 1828—two days after Arthur Black, one of four survivors of Jedediah Smith’s fur trading party, found his way to Fort Vancouver.  Smith’s party was attacked by Kalawatset (or Lower Umpqua) Indians …