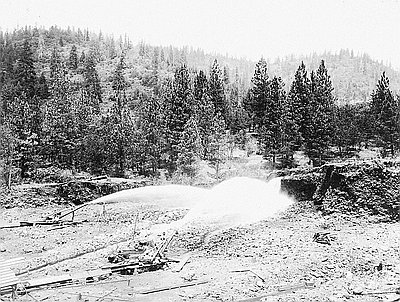 This photo, probably taken in the early 1910s, illustrates how thoroughly hydraulic mining reshaped the landscape of southwestern Oregon. Two massive monitors, also called giants, are shown blasting water into a placer deposit, washing the soil into flumes. The flumes had riffles that trapped the heavier valuable minerals while allowing the waste sediment to flow away. Most of the unwanted sediment ended up in streams and rivers where it smothered the spawning beds of fish and filled wetlands and other low-lying areas, increasing the frequency and intensity of floods.

The operation shown here is the Sterling mine, named after James Sterling, who settled near present-day Phoenix in 1853. The mine had its beginnings in 1854, when Sterling and some friends discovered gold in an area southwest of Jacksonville. Although Sterling himself probably received less than $50 from his discovery, the mine that bore his name would end up producing millions of dollars in gold over the course of a century.

Early mining activity in the area was a hodgepodge of individual efforts, but in June 1877, ownership of the mine was consolidated in the hands of the Sterling Mining Company. Over the course of the next fifty years, the company dug dozens of miles of ditches and expanded the mine to cover more than 2,000 acres. By the turn of the century, it was the largest placer mine in Oregon.

The mine continued to be profitable until World War I, when operating costs began outpacing profits. The mine operated only sporadically after the war. By World War II, the Sterling operation had been reduced to one man—Paul Pearce—who continued to scratch a living from the used up land.

Mining Sections of Idaho and Oregon, 1864

This 1864 map of the mining sections of Idaho and eastern Oregon was drawn by George Woodman and published by San Francisco bookseller Adrien Gensoul. The map was based in part on Woodman’s own travels and surveys in the early 1860s. Prospectors would have carried maps like this one in …

The U.S. Geological Survey (USGS) made this 1912 map. Between 1907 and 1930, George Otis Smith was the director of the USGS, an agency created in 1879 to classify federal lands and study their geology and mineral resources.

In the early 1850s, prospectors first discovered gold in the southern region …