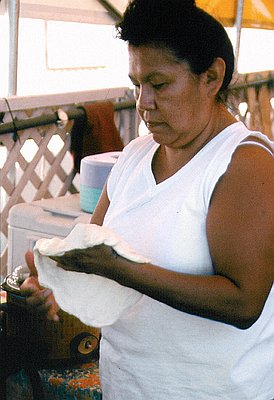 This photograph of Roma Cartney making frybread was taken on July 25, 1998 by Laura Strobel at the Jefferson County Fair in Madras, Oregon. Strobel also interviewed Cartney for a traveling exhibit project titled Traditional Arts of the Oregon Country (TAOC). The TAOC exhibit was curated by the Oregon Historical Society Folklife Program and traveled throughout Oregon from December 1998 through December 1999, moving monthly between rural libraries.

Roma Cartney was born on the Confederated Tribes of Warm Springs Reservation in 1947. As a child, her mother taught her how to prepare frybread and other traditional foods. According to Cartney, “When we teach our children how to make our frybreads―or work in the kitchen―they have to have a good heart and good attitude. You don’t want to feed your anger to people.  If they have an attitude―if they’re angry―they have to leave the kitchen.” Since 1996, Roma and her sister, Lucinda Green, have been selling frybread at large public gatherings where they are able to offer a taste of the “Indian version of elephant ears” to customers of all cultures.

Frybread became a common food in Native American communities following their widespread relocation from traditional lands onto reservations in the nineteenth century. Without sufficient access to good farmland or traditional hunting and gathering grounds, many families became increasingly dependent upon federal rations of wheat flour, salt, and lard. Women used these limited ingredients to stave off hunger amongst their loved ones by making high-calorie, fried flatbreads. Because Native American households across the United States shared the experience, frybread eventually became a symbol of unity―sometimes humorously expressed as “frybread power!”

Frybreads are often eaten with toppings such as butter, cinnamon, sugar, jelly, and honey. They are also made into “Indian tacos” by topping them with chile beans, meat, salsa, lettuce, and cheese. According to Cartney, fewer Native Americans are frying their breads at home these days because of health concerns.  Many people are opting instead to bake or boil their breads for home use. Still, frybreads continue to be incredibly popular at festive occasions such as fairs and powwows.