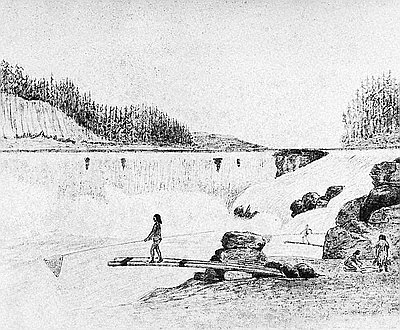 Artist Joseph Drayton observed and sketched native life as one of several artists hired for a naval expedition led by Lieutenant Charles Wilkes from 1838 to 1842. Drayton’s sketch depicts Indians using dip nets to fish from platforms extended out over Willamette Falls. The Clackamas and Kalapuyan Indians inhabited the region around Willamette Falls, but diseases such as smallpox and malaria decimated these bands in the early 1830s. Surviving remnants of Kalapuyans and Clackamas were relocated in the late 1850s to the Grand Ronde Reservation. The U.S. Exploring Expedition, funded by the U.S. Congress as the first American maritime expedition to promote commercial opportunity and scientific knowledge, also included a geologist, a naturalist, and a botanist. A flotilla of sailing ships and their crews mapped, explored, catalogued, and documented the inhabitants and habitats of the Pacific Northwest, as well as the South Pacific and Antarctica. The federal government sent the expedition to the Pacific Northwest in part to solidify an American claim to the region at a time when it was owned jointly by the United States and Great Britain.

Further Reading:
Hunn, Eugene S. “Whatever Happened to the First Peoples of the Columbia?” In Great River of the West : Essays on the Columbia River. William L. Lang and Robert C. Carriker, eds. Seattle, Wash 1999.