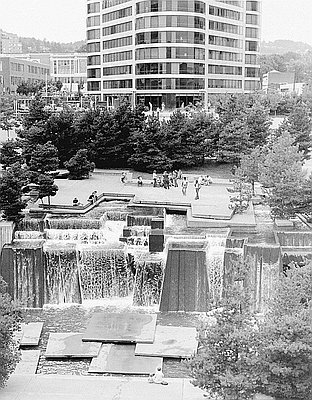 The Ira Keller Fountain has been a favorite feature of the Portland landscape since it opened in 1970.  Its cascading waters create an inviting backdrop for summer lunches and for office worker who work in the downtown area.  The Fountain even draws Civic Auditorium audience members outside to stretch their legs during intermissions in operas, symphony, and plays that take place across the street at the Auditorium.

Originally called the Forecourt Fountain, it was rededicated in 1978 in honor of the civic leader who shepherded the urban renewal project called the South Auditorium Renewal Project through to completion.  The urban renewal project, begun in 1958 had always included a plan for a public space across from the auditorium, and the design, by architect Angela Danadjieva, won immediate acclaim from planners and designers around the world.

Despite the success of the new public space, the project did not come without a price.  The neighborhood encompassed by the South Auditorium Renewal area was an old stopover neighborhood.  The heterogeneous neighborhood’s residents were primarily a mix of first generation Italians and Jews, many of whom had children who had moved to the suburbs.  The Jewish Community Center, five synagogues, and a kosher shopping district formed the core of Portland’s Jewish neighborhood, drawing business “home” from throughout the metropolitan area.  Residents formed a group to protest the decision to raze buildings in the blighted high-crime area, but the Development Commission was determined to build offices, retail space, a hotel, apartments, and transportation within the area.  Besides the Jewish residents, Italians, Irish, Chinese, and other ethnic groups were affected when the city used the process of eminent domain to remove them from their homes.