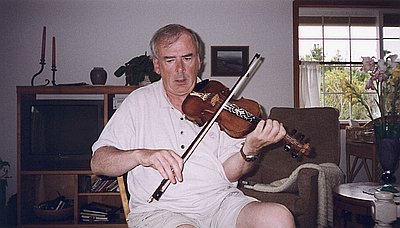 This photograph of Tommy McCreesh playing an eighteenth-century Irish fiddle in his Florence home was taken by Revell Carr in July 1998.  Carr also interviewed McCreesh as part of his fieldwork for a traveling exhibit project titled Traditional Arts of Oregon Country (TAOC).  The TAOC exhibit was curated by the Oregon Historical Society Folklife Program and traveled throughout Oregon from December 1998 through December 1999, moving monthly among rural libraries.

Those Irish who traveled to the West over the Oregon Trail had been in the United States long enough to save money to finance the journey.  According to historian Mary Jane Sorber, Oregon Donation Land Claim records list 139 Irish immigrants who held claims in the 1840s and 1850s.  A small group of Irish farmers settled an area between the Long Tom and Willamette rivers, north of Junction City and south of Corvallis.  Irish migrants from California and the East were also attracted to the rich farmlands of Marion County and the Catholic Church in St. Paul.  Irish laborers migrated to Portland in the 1870s to lay railway tracks, dig sewers, work on the docks, and build roads.  Irish immigrants migrated to Morrow and Lake counties to work as shepherds or on cattle ranches.  Some Irish laborers eventually earned enough money to purchase their own land and cattle ranches, open businesses, or attend college and become lawyers, educators, and politicians.  According to the 2000 census, nearly 12 percent of Oregon’s population is of Irish ancestry.

The majority of Irish emigration can be divided into three periods: 1820 to 1844; the “Famine Years” (1845 to 1855); and post-famine to 1930.  Most left Ireland for financial reasons.  The majority of Irish were farmers who depended largely on potatoes and other crops that could withstand the rugged Irish soil.  Although hundreds of thousands left Ireland during the potato famine, the majority of Irish emigrants left in response to prejudicial British taxes, religious persecution, and land loss.  Many of them had friends or relatives in America who boasted of a better life.  Approximately 4.5 million Irish immigrated to the United States between 1820 and 1930.  By 1900, 15.7 percent of the 10 million foreign-born in the United States were Irish.  Most Irish immigrants did not have the capital necessary to buy a farm or business in America, thus most settled in the port cities of New York and Philadelphia, or traveled south from Canadian ports to settle in Irish enclaves in New England, such as Boston.

Daniels, Roger. Coming to America: A History of Immigration and Ethnicity in
American Life. New York, 2002.