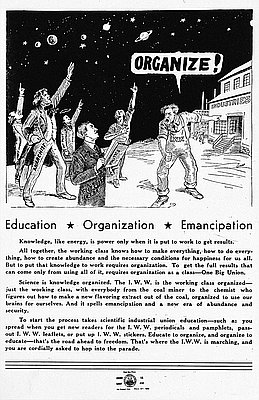 This undated organizational/promotional poster was published by the Industrial Workers of the World (IWW) in New York for distribution throughout the United States and potentially any other English-speaking country.  The poster’s heading, “Education—Organization—Emancipation” represents the most basic strategy used by the IWW  in their struggle to wrestle control of the world’s industries away from the “employing class” and into the hands of the “working class,” whom they tried to form into “one big union.”

The IWW was created at the “Continental Congress of the Working Class,” held in Chicago in 1905.  According to the preamble of the IWW’s constitution, “a struggle must go on until the workers of the world organize as a class, take possession of the earth and the machinery of production, and abolish the wage system.”  Unsatisfied by the small, piecemeal concessions periodically won by the country’s labor unions from powerful industrialists, the IWW’s members committed themselves to revolution-based class conflict, hoping to form “a new society within the shell of the old.”

As the text of this poster indicates, the IWW leadership understood the need for education programs.  They formed “propaganda leagues” and “industrial education clubs” as a means to disseminate their literature, often using images that could be easily understood.  One of the most effective mediums through which the IWW was able to espouse their cause was through song, like the popular “Casey Jones, the Union Scab,” used during a railroad strike against the Southern Pacific Railroad in 1911.

The IWW’s revolutionary rhetoric and their use of propaganda that condoned violence and sabotage made them enemies of municipal, state, and federal governments, along with a significant number of their constituents.  Consequently, IWW “agitators” were often treated as violent criminals and even as traitors by various jurisdictional authorities.  After the success of the Russian Revolution in 1917, the U.S. government’s limited tolerance of the IWW practically disappeared.  The U.S. Justice Department raided the IWW’s headquarters and offices throughout the country, imprisoned their leadership, and confiscated their records.  Since then, the organization’s voice has continued to operate, but in a much scaled down version.

Further Reading:
Dubofsky, Melvyn. We Shall be All:  A History of the Industrial Workers of the World; edited by Joseph A. McCartin. Urbana, Ill., 2000.