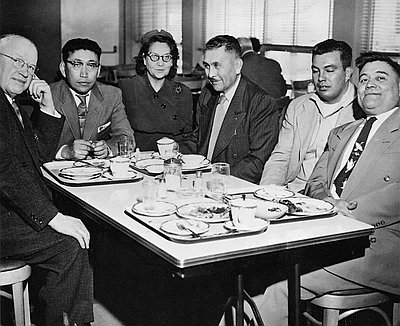 To some Klamath Tribal members, which included Klamath, Modoc, and Yahooskin Indians, the reservation symbolized subservience to Anglo-American society, and for greater than 70 years, the reservation had altered the tribes’ way of life.  The educational system administered by the Bureau of Indian Affairs suppressed the use of their native language and taught them that their Indian culture was inferior.  According to anthropologist Theodore Stern, reservation-born Klamath Indians were essentially discouraged from identifying with their heritage.  At the same time, Stern concludes, they were often rejected by white society.  After World War II, some Klamath Tribal members rejected reservation life and advocated that tribal assets be divided among members rather than managed by the federal government.  The Klamath Tribal Council Executive Committee, shown here in 1955, agreed that a change was needed, although they did not fully support termination.  Their legal status and isolation on the reservation, however, had kept the Natives from enjoying their full rights as U.S. citizens.

In 1974, the U.S. Supreme Court ruled that the Klamath Tribes had retained their treaty rights to hunt, fish, and gather on their traditional tribal lands, and in 1986, they regained federal recognition.  Although their land was not returned, the tribes were encouraged to develop a plan to become economically self-sufficient.  After reviewing hundreds of ideas, the Klamath Tribes opened the Kla-Mo-Ya Casino in 1997.