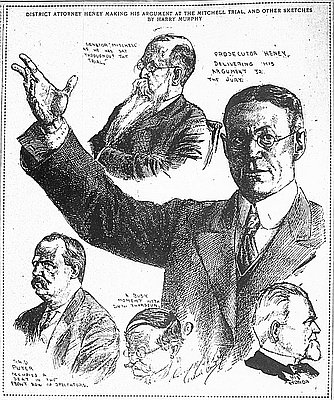 During the first decade of the twentieth century Oregon’s national reputation was marred by a series of embarrassing land fraud scandals. Federal investigations revealed that land speculators and timber companies had illegally obtained large portions of the public domain with the assistance of public officials. Federal prosecutors indicted most of Oregon’s congressional delegation, including Republican Senator John H. Mitchell (1835-1905), who had represented Oregon in the U.S. Senate for over twenty years.

The U.S. Attorney’s Office argued that Senator Mitchell had illegally used his position to aid a client of his law firm in the acquisition of patents to several dozen fradulent land claims. U.S. District Attorney Francis Heney introduced evidence that strongly suggested Mitchell not only knew that his actions were illegal, but that he had falsified evidence in an effort to conceal his wrongdoing. Both Mitchell’s law partner, Judge Albert H. Tanner, and his personal secretary, Harry C. Robertson, testified against him, casting further doubt on the senator’s innocence. On July 3, 1905, the jury found the senator guilty as charged. The judge sentenced Mitchell to six months in the Multnomah County Jail and ordered him to pay a $1,000 fine.

Mitchell appealed his conviction, but before his appeal could be heard, he died from complications associated with a tooth extraction. It was widely held that the strain of the trial was the true cause of the aged senator’s death. Many Oregonians believed that Mitchell was a scapegoat unfairly persecuted by a fanatical prosecutor motivated by partisan politics. Former governor T.T. Geer (1899-1903) noted that “the feeling at the time of Senator Mitchell’s trial was that he was more sinned against than sinning, that through the promptings of a generous heart he merely did that for pay in a few instances which he did thousands of times without thought of remuneration, and that a useful public servant was sacrificed on the rising but ephemeral tide of 'Muckrakism.’

This map appeared in Stephen A.D. Puter’s 1908 book, Looters of the Public Domain, written while the author was in jail for land fraud. It shows Township 11 South, Range 7 East, an area of land high in the Cascade Mountains that was at the center of the first …