Land Use in the 1995 Oregon Legislature 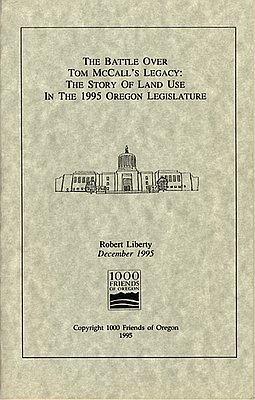 This pamphlet was written and published by Robert Liberty of 1000 Friends of Oregon. As the title indicates, the pamphlet tells the "story of land use in the 1995 legislature." On May 29, 1973, Governor Tom McCall signed Senate Bill 100 into law, creating a statewide structure and mandate for local land-use planning. In 1975, McCall worked with other leaders in the state to create 1000 Friends of Oregon, which organizes citizen oversight of the implementation of the land-use law and lobbies to stop efforts to overturn the law.

McCall, a moderate Republican who had gained notoriety as an environmentalist with his 1961-1962 documentary "Pollution in Paradise" prioritized implementing land-use regulation while serving as Oregon's governor from 1967 to 1975. In the decades after World War II, people used cars more than before, and urban areas sprawled beyond central downtown districts. As residential and commercial development spread, land available for farming was drastically reduced. Water supplies were also threatened by pollution that resulted from a lack of zoning and regulation on development. Senate Bill 100 required urban centers to create urban growth boundaries and established two new state agencies -- the Land Conservation and Development Commission and the Department of Land Conservation and Development -- that were charged with protecting farming and forest-use land from development.

As described in this 1995 pamphlet, groups of citizens and business interests have fought continually to overturn the land-use law and discontinue statewide planning. Primary among groups working to discontinue land-use planning is Oregonians in Action, an organization dedicated to protecting private property rights. The group was largely unable to further its agenda during the 1995 session, but has recently been more successful.

In 2000, voters approved Measure 7 -- a ballot initiative supported by Oregonians in Action. Measure 7, a constitutional amendment, required governments to compensate landowners if regulations reduced property value. On October 4, 2002, the Oregon Supreme Court overturned the measure on technical grounds. In 2004, Oregon voters passed Measure 37, which essentially implemented the same regulations as Measure 7. After an onslaught of claims were filed across the state, the 2007 Oregon State Legislature decided to send a revision of the law to voters.