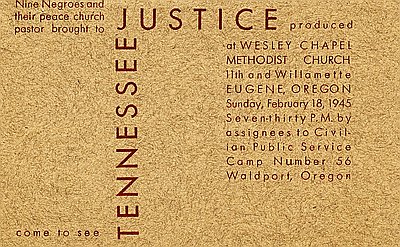 This leaflet was produced by members of the Civilian Public Service Camp #56 at Waldport. It is an advertisement for a play that members of the camp performed in Eugene on February 18, 1945.

Civilian Public Service Camp #56 was one of more than 150 work camps the federal government helped organize for the nearly 12,000 conscientious objectors (COs) who refused to participate in war efforts during World War II. The federal government initiated the Civilian Public Service (CPS) program in 1940 in response to lobbying by churches like the Society of Friends, the Church of the Brethren, and the Mennonites. These churches, known as “peace churches” because they were advocates of pacifism, proposed an alternative to military service that would allow conscientious objectors to engage in “work of national importance” in camps under civilian direction.

The first CPS camp in Oregon was established in November 1941 at Wyeth, a small town in the Columbia River Gorge. Three more followed within a year, one on the coast near Waldport, one in the Umpqua Valley at Elkton, and one in central Oregon at La Pine. The camps at Waldport, Wyeth, and Elkton were run by the peace churches, while the camp at La Pine was administered by the U.S. Bureau of Reclamation. All of the camps focused on conservation work, primarily forestry related.

The camp at Waldport was established in September 1942. The men who lived there felled snags, graveled roads, planted trees, cut firewood, and fought fires under the direction of the U.S. Forest Service. The Waldport camp is best known for its fine arts group, the members of which practiced a variety of visual, literary, and performing arts. One of the products of the fine arts group was the play advertised on the flyer above. Written by Marty Ponch, a CO from the Waldport camp, Tennessee Justice was about a Black preacher who was arrested and brought to trial for encouraging resistance to the draft. Some of the members of the fine arts group went on to play important roles in the San Francisco renaissance, a post-war artistic movement.

Local residents had mixed reactions to the camp at Waldport. While some were sympathetic to the COs and their pacifist ideals, others resented their presence. Archivist Joyce Justice notes that one resident of Yachats informed his congressman that the coast “is a restricted military area [and] is a poor place for a bunch of men who ar[e] to[o] damn yellow to fight for the country that feeds them….If we have to keep them put them back in the interior like they do the Japs.”

Conscientious objectors served at the CPS camps for the duration of the war. All of Oregon’s CPS camps were closed by the end of 1946.