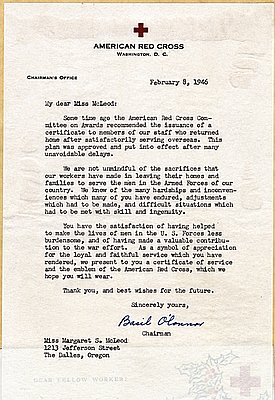 This letter was sent to Margaret McLeod by American Red Cross Chairman Basil O'Connor in recognition of McLeod's service during World War II. McLeod was one of hundreds of Red Cross volunteers, many of them women, who provided services to American military personnel in Europe. McLeod saved this letter and the certificate it accompanied as part of a scrapbook and collection of letters and memorabilia from her service in Europe, which is now held by the Oregon Historical Society.

McLeod was born in Kingsley, Oregon, on February 1, 1902, and she received a Bachelor of Science in vocational education from Oregon State College (now Oregon State University) in 1926. She then traveled for twenty years, working in schools or for the Red Cross in Hawaii, California, and Panama before attending Red Cross training in Washington D.C. and being sent to Britain as a volunteer in February 1943.

At the time, thousands of American troops were stationed in Britain, and the American Red Cross created social clubs to provide them with a comfortable respite from war. The first clubs opened in May 1942 and by the end of that year forty-five clubs were in operation. Clubs provided food, laundry facilities, books, games, music, writing supplies, and a chance to socialize. In fall 1942, the Red Cross began to operate clubmobiles, which distributed doughnuts, coffee, newspapers, cigarettes, and gum to military personnel stationed too far away to take advantage of club services.

Newspaper clippings in McLeod's scrapbook testify to the value American military men placed on simply having women, particularly American women, nearby. In one letter home, McLeod wrote: "We were led to believe in Washington that clubmobile girls are to be glamour girls. Imagine me a glamour girl at my age!" Other letters document the difficult, long hours McLeod and the other women put into their work.

As the front advanced across Europe, McLeod and other Red Cross "girls," as they were typically called, traveled with it. They opened clubs in war torn cities across Germany, France, and Italy, and sometimes lived with troops in combat areas. Women were not permitted to enter areas that were actually under fire, so they baked doughnuts behind the lines, and Red Cross field directors, who were men, brought them up to men at the front.