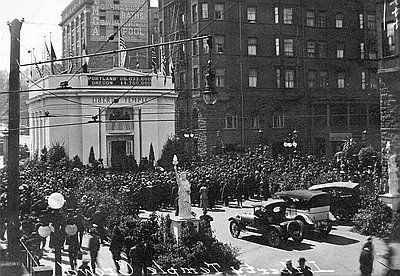 During World War I, patriotic Portland volunteers used donated materials and funding to build Liberty Temple as a place for patriotic rallies and the state headquarters for the Third Liberty Loan Drive. In March 1918, workers finished the bulk of the construction in three days and completed the entire job within several weeks. Julius Meier, the son of Meier & Frank founder Aaron Meier (who later became Oregon’s governor), led the building committee. The classically styled building, flanked by two miniature replicas of the Statue of Liberty, was located in the middle of Sixth Avenue between Southwest Morrison and Southwest Yamhill.

The national Third Liberty Loan Drive encouraged Americans to purchase loans to fund the nation’s World War I campaign. Meier and others urged all Portland workers to participate in the drive by investing in national war bonds. Oregon was the first state in the nation to reach its drive quota, which was $18,495. Many Portland residents, members of the press, and drive leaders considered people who did not buy bonds to be dangerously un-American. Librarian M. Louise Hunt, for example, was pressured to resign her city job after she steadfastly refused to purchase Third Liberty Loan bonds. Hunt, a pacifist and conscientious objector, was vilified in the local newspapers.

Liberty Temple, which was also used as an employment bureau, did not last long after the war ended. In 1919, storeowners and others complained that the building blocked traffic, and it was relocated to the intersection of Park Avenue and Salmon Street. The temple was torn down in 1920.

The son of Aaron Meier, a founder of the Meier & Frank department store chain, Julius Meier was born in 1874. After graduating from the University of Oregon Law School in 1895, Meier spent four years practicing law before joining the family business. He became store manager and vice president …