Lithograph, Valley of the Willamette River 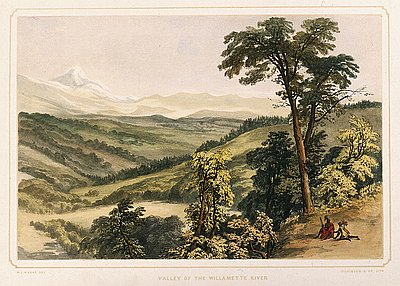 In early May 1845, Lieutenant Henry J. Warre and Lieutenant Merwin Vavasour, officers in the British army, departed from Montreal in Lower Canada with a Hudson’s Bay Company overland brigade. The officers’ final destination was the Oregon Country far to the west. Their mission was to conduct covert surveillance of the region for the British government. Traveling as civilians, Warre and Vavasour were charged with producing a comprehensive report on the possibilities for a British military defense of the Oregon Country in the event of war with the United States. The Warre and Vavasour mission came at a time of heightened tensions over territorial rights in the Pacific Northwest.

After an arduous overland trek, Warre and Vavasour reached Fort Vancouver on the Lower Columbia in mid August, 1845. The British officers spent the next six months exploring the Oregon Country. Throughout these travels Lieutenant Warre completed numerous landscape sketches of the region. This sketch of Mount Washington depicts an easterly view of the Willamette Valley, the homeland of the Kalapuyan Indians. The lithograph is actually an embellishment of Warre’s sketch. The original artwork features two vaguely-defined individuals who could either be Indians or French Canadian fur trappers. In contrast, the English lithographer’s work clearly depicts two Natives resembling Eastern or Plains Indians. The edenic landscape as sketched by Warre overlooks the presence of the indigenous Kalapuyans and their impact on the landscape. Prior to the influx of large numbers of Euro American settlers into the Willamette Valley in the 1840s, the various Kalapuyan groups would annually burn sections of the valley throughout the summer and fall. The purpose behind this large-scale landscape management was to prevent the spread of dense forests in the valley, and thereby retain the open prairies and small oak stands that supported the plant and animal life crucial to the Kalapuyans’ seasonal round.

Warre, Henry J. Overland to Oregon in 1845: Impressions of a Journey across North America. Edited by Madeleine Major-Frégeau. Ottawa, Canada, 1976.