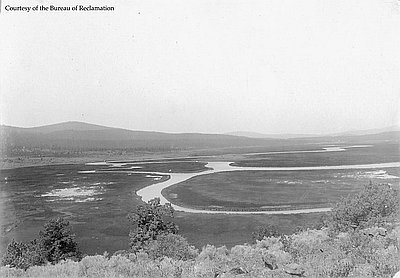 The Klamath Basin National Wildlife Refuge complex includes the Upper Klamath, Klamath Marsh, and Bear Valley Refuges in Oregon and the Lower Klamath, Tule Lake, and Clear Lake Refuges in California.  It has been estimated that nearly 80 percent of the migratory waterfowl in the Pacific Flyway pass through the Klamath Basin, which has been known to have the largest concentration of waterfowl in North America.  The Clear Lake Refuge, created in 1911, is considered an important nesting ground for white pelican, currently hatching about 1,400 fledglings per year.  The Bear Valley Refuge was established in 1978 to protect wintering bald eagles.  Tule Lake and Lower Klamath refuges, however, are considered the most important waterfowl refuges in the complex.

Fifty-five to 60 percent of the migratory birds that pass through the Basin use Tule Lake and Lower Klamath refuges.  In 1908, President Theodore Roosevelt established the Lower Klamath Refuge (which included Lower Klamath Marsh, shown here in 1907) as the nation’s first waterfowl refuge, a mandate proposed by the Audubon Society and conservationists such as William L. Finley.  Today, the 50,000-acre refuge is intensively managed to provide nesting, habitat, vegetation, and grains for migrating and wintering waterfowl.   Under the provisions of the Kuchel Act of 1964, farmers are allowed to lease land in refuge areas provided that 75 percent of the land is dedicated to growing cereal grains and other wildlife-friendly crops.  Currently, over 17,000 acres are leased in the Tule Lake Refuge.

This photograph was taken in August 1937 by Ralph Gifford, a photographer for the Oregon State Highway Department. It shows the Malheur Migratory Bird Refuge, which was designated a National Wildlife Refuge in 1940.