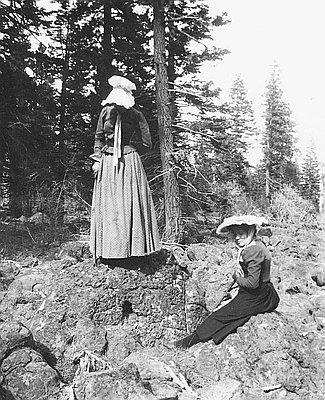 This photograph, from the collections of the Schminck Memorial Museum, was taken in April 1900. It shows sisters Lula Schminck and Florence Klippel on a lava bed in Summer Lake Valley.

Schminck (born 1878) and Klippel (born 1865) were the daughters of James and Elizabeth Currier Foster. James Foster, born in Ohio in 1827, came to Oregon from Missouri in 1845 with his father. Elizabeth Currier was born in Vermont in 1832, but had lived in Massachusetts, New York, and Missouri before coming to Oregon in 1846 with her sister, brother, and brother-in-law.

Currier’s family was among the first group of overlanders to take the Southern Emigrant Route, also known as the Applegate Trail, to the Willamette Valley. She remarked in a 1914 reminiscence that she and her family “laid by sixteen days in the Calapooia Mountains waiting for the road to be cut out. I had to ride on horse back and help drive the cattle after Mr. Applegate took all the men that could be spared. The people behind us had a terrible time getting through. Most of the train got caught in the canyon that winter and some died.”

Elizabeth Currier married James Foster in November 1848, and the two settled on a donation land claim near Corvallis. In 1871, James and his son Andrew headed east of the Cascades to Summer Lake Valley, where James picked out a land claim. He moved his family there in November 1873. The Fosters were among the first settlers in Summer Lake Valley. Although most other settlers soon left the valley for greener pastures, the Fosters perservered in the often difficult environment.

In February 1878 James and Elizabeth had their fifteenth child, a daughter they named Lula. Lula grew up on her parent’s ranch in Summer Lake Valley before moving to Lakeview, where, in 1901, she married a store clerk named Dalpheus Schminck. In 1922, the Schmincks built a stylish bungalow on the eastern edge of town. They became collectors of pioneer artifacts and other memorabilia, and in 1936 they opened a small museum in their basement. Local people gave donations to the couple, who also made handicrafts themselves.

The Schmincks—both of whom died in the 1960s—willed their bungalow and its contents to the Oregon State Society of the Daughters of the American Revolution, who named the house the Schminck Memorial Museum. The museum is still open to the public.