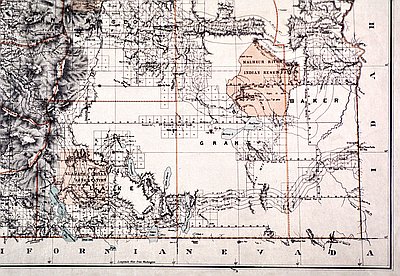 This detail from an 1879 General Land Office map shows the Malheur Indian Reservation in southeastern Oregon. An 1872 executive order by President Ulysses S. Grant established the nearly 1.8 million-acre reservation as a home for “all the roving and straggling bands in eastern and southeastern Oregon.”

By 1875 more than 700 Paiute and Bannock Indians were spending their winters on the reservation, an agricultural school had been established, and several dozen Indian men were learning how to farm. The administration of the reservation, however, was severely hampered by a steady reduction in federal appropriations. Agent W.V. Rinehart complained to his superiors that “it is the avowed policy of the Government to make the Indians self-supporting, and yet I am left without the means to make the initiatory steps for the furtherance of that policy….I ask if it is fair or reasonable to circumscribe the already limited energies of a people whom God made as free as the deer on their mountains; to curtail their natural means of subsistence by herding them upon reservations, that the dominant race may enjoy their territory, and then expect them to support themselves without assistance?”

Rinehart’s complaints fell on deaf ears. Appropriations were reduced again the following year, medical supplies arrived nearly a year late, and to make matters worse, local stockmen had begun encroaching upon reservation lands. Some were so bold, Rinehart wrote his 1878 report, “that they have even taken up their residence within the limits of the reservation, and make no secret of their intention to occupy and use the land.”

In June 1878 conflict between Indians and whites in southeastern Oregon came to a head. A group of Bannock Indians from Idaho arrived on the Malheur Reservation and convinced some of the local Paiutes to join them in an uprising against the settlers. This short conflict, known as the Bannock War, proved to be the undoing of the Malheur Reservation. After the end of the war in the fall of 1878, the majority of the residents of the reservation were forcibly removed to Washington territory’s Yakama Reservation. President Chester Arthur restored the Malheur Reservation to the public domain in 1882 and 1883.

All of the Paiute who were removed to Washington Territory had left the Yakama Reservation by 1883. Some moved to the Warm Springs Reservation or to Nevada, while others returned to the Harney Basin, settling near Burns. In 1972, the Burns Paiute Tribe acquired title to 771 acres of land, forming the Burns Paiute Indian Reservation.

Soucie, Minerva T. “The End of a Way of Life: The Burns Paiute Indian Tribe.” In The First Oregonians: An Illustrated Collection of Essays on Traditional Lifeways, Federal-Indian Relations, and the State’s Native People Today. Edited by Carolyn M. Buan and Richard Lewis. Portland, Oreg., 1991.