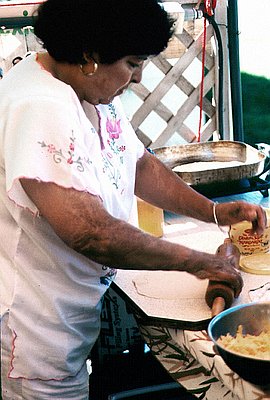 This photograph of Manuela Wickham preparing corn tortillas in the “Hispanic Village” of the Jefferson County Fair in Madras, Oregon was taken by Laura Strobel on July 25, 1998.  Strobel interviewed Wickham for a traveling exhibit project titled Traditional Arts of the Oregon Country (TAOC).  The TAOC exhibit was curated by the Oregon Historical Society Folklife Program and traveled throughout Oregon from December 1998 through December 1999, moving monthly between rural libraries.

Manuela Wickham was born in 1948 in San Luis Potosi, Mexico. In 1957, her family moved to central Oregon and found work in the potato and mint fields around Culver. Although her mother’s tortillas were homemade, Wickham didn’t learn how to make them herself until after she was married in 1972. By the mid-1980s, Wickham’s Mexican-cooking skills had matured, and she began publicly demonstrating the art of tortilla-making for local school groups and through various cultural awareness programs.  According to Wickham, “The reason why I continue to make tortillas is because it’s a part of my culture and it reminds me of my mother. I can always hear her patting the tortillas with her hands.”

Maize was first domesticated for human consumption around 5,000 B.C.E. by Native Americans living in lands now under the authority of Mexico. By 1,500 to 1,200 B.C.E., an important preparatory process known as nixtimalization was discovered which increased the food’s protein value through soaking the kernals in a heated mixture of lime (or ash) and water. This procedure also allowed for the pericarp (the thin skin covering each kernal) to be removed by hand.  Without the skins, the soft, wet kernels can be easily ground into nixtimal on an angled stone surface called a metate.  To make tortillas, small, palm-size balls of nixtimal dough are patted into thin, round flatbreads and then heated on a hot griddle called a comal.