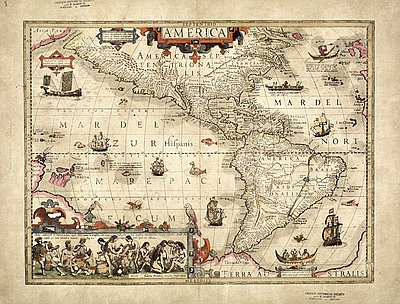 This map of the Americas was published in 1606 by Dutch cartographer Jodocus Hondius (1563-1612). It is an excellent example of early seventeenth-century European cartography.

The continental outline of the Americas is depicted relatively accurately in this map and the areas explored by the Spanish are mapped in great detail, but much of the interior of North America is left blank as Europeans had not yet discovered the Mississippi River, the Great Lakes, Hudson Bay, or the Rocky Mountains. The St. Lawrence River is charted, but it is shown originating far to the southwest of its actual source. The northern portion of the continent is obscured by the title cartouche, suggesting that the cartographer was reluctant to speculate about the geography of that unknown portion of the earth's surface.

The Northwest Coast is one of the least accurate portions of this map, a reflection of the lack of information Europeans had about the region during the late sixteenth and early seventeenth centuries. English adventurer Francis Drake had sailed up the western coast of North America in the late 1570s, claiming part of the coast for England and naming it “New Albion” (Albion is an archaic term for England). It is not known how far north Drake sailed, but some historians have speculated that he may have reached Oregon. This is the earliest map in the Oregon Historical Society's collection that uses Drake's term “New Albion.” The map also shows the fabled Straits of Anian, a version of the mythical Northwest Passage. Some Europeans believed that these straits might be part of a water route that would connect the markets of Europe with those of Asia.

This map is also noteworthy for its use of the Mercator projection. A projection is a mathematical model which cartographers use to map curved surfaces on a flat plane. In the late 1560s, Flemish geographer Gerhardus Mercator (1512-1594) developed a system by which mariners could use flat maps to plot accurate courses on the curved earth. Hondius was one of the first cartographers to make use of Mercator’s projection, which is still in use today.