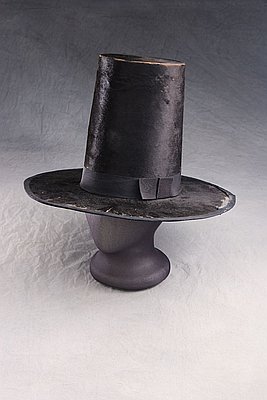 This stovepipe hat, made from beaver fur, was popular throughout the mid-nineteenth century, but after the 1840s was increasingly made from silk.

During the mid-sixteenth century, hats made from beaver fur became a mark of wealth on the European mainland. The hats, remarkable for their sturdiness and ability to repel water, quickly became a fixture atop the heads of status-conscience Europeans. Demand for the hats was high, and by the early seventeenth century, beaver were trapped to extinction in Western Europe. Subsequently, fur trappers ranged deeper into Eastern Europe and across the Atlantic Ocean to North America in search of beaver pelts to supply the hat-making industry.

Beaver pelts acquired from European colonies and American territories were sent mostly to London and Paris, where they were sold at large auctions primarily to hat-makers.  Once in the factories, the furs were plucked clean of the unwanted outer layer of gold fur, called guard-hairs. After the guard-hair was removed, the soft and luxurious layer of dark fur that still remained was shaved from the skin and removed to be treated with mercury and felted into mats before being shaped into the fashion of the day. Repeated exposure to mercury often caused nerve damage and mental disorders among the hatters working the hats into shape, eventually giving rise to the phrase “mad as a hatter.”

By the 1830s, beaver populations had plummeted across North America. Fur-trading companies responded by supplementing their dwindling beaver supplies with muskrat, mink, and marten furs, but the fur was not as easily felted or of as high quality. The Hudson’s Bay Company even briefly considered creating a beaver preserve on the Olympic Peninsula of modern-day Washington, but abandoned the idea because of their inability to effectively prohibit their competitors—primarily American trappers—from taking beaver from the preserve. Beginning in the 1830s, as hat fashions turned toward silk manufacturing, the demand for beaver fur began to drop. By mid-century, prices offered for beaver pelts had dropped so low, and the rodents had become so hard to find, that it was no longer profitable to trap them.

Mackie, Richard. Trading Beyond the Mountains: The British Fur Trade on the Pacific, 1793–1843. Vancouver, B.C.